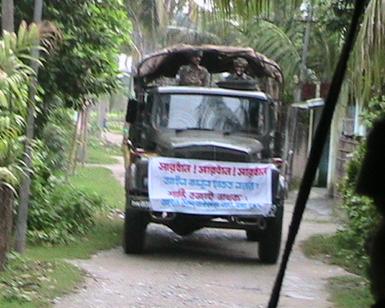 A stunned Assam Government is trying to call the string of violence in Udalguri an ethnic cleansing by the National Democratic Front of Bodoland (NDFB) currently in ceasefire with the government.

According to the government sources,its not due to clashes between the Bodos militants and immigrant Bangladeshis, but a systematic ethnic cleansing perpetrated by the NDFB to clear the BTAD areas of the non-Bodos people. The government has already arrested four NDFB cadres on Sunday with weapons saying they were involved in killing a woman and a child in Baksa district.

On the other hand, BTAD chief Hagrama Mohilary, who is the coalition partner of the Gogoi government has already smelt role of the NDFB militant and the Bodo peace Forum saying their role is doubtful.

Meanwhile, the NDFB general secretary Govinda Basumatary has refuted their role in the violence and has rubbished the allegations of involvement in the riot.

Permalink Submitted by Rajveer Baruah on Mon, 06/10/2008 - 20:35
It is very inappropriate for the govt. to held NDFB directly responsible for the ongoing violence. I don't understand why the present state govt. is so much sympathetic towards the illegal Bangladeshi migrants. Stop playing this vote bank politics. Even after a national news channel broadcasting the footage of a Pakistani flying in the violence hit area, our honourable CM says that he has no such information. As for Hagrama Mohilary, what can I say about him. He already stated that he is in favour of a separate Bodo state. So it is not fair to blame NDFB alone. Is the govt. have any data as how many BLT cadres surrendered their arms??

Permalink Submitted by Ronny Mosahari on Tue, 07/10/2008 - 03:05
I feel ashamed to call myself a Bodo because of leader like Hagrama Mohilary. If the NDFB are involved in the violence what wrong have they done. Just because their ideology do not match with his and he is afraid to loss the next election as he has not supported his people during the time of crisis (because his bank account has not reached his dream figure so he will continue supporting the Bangladeshi friendly Congress government at the cost of his own people). He has directly blamed NDFB. Why don't Hagrama wake up, he can rule but how long.

Permalink Submitted by Jyotish Gogoi on Tue, 07/10/2008 - 04:59
Congress knows that if it accepts that it is a conflict rather than "ethnic cleansing" by NDFB, it will bring into the forefront this burning issue of illegal migrants all over Assam & then it might face uncomfortable questions with elections coming by. It knows that it has already lost the Muslim vote bank to AUDF & it needs now the AUDF's support. Its time now for people of Assam to come together irrespective of their race, caste to stand together & kick out the Bangladeshis.

Permalink Submitted by Alankar Kaushik on Tue, 07/10/2008 - 16:07
A time where security for the common civilians is of utmost necessity in a state where a cauldron of ferocious activities are going on, it is really pathetic to know that the blame game of political parties are still on. Tons of people are affected and many died in the violence in Udalguri and Darrang, how can one wait to blame a particular community and see the consequences. A proper strategic security arrangement should be made for the civilians and try to solve out the problem pinching the people in creating such a nuisance. A country where communal forces are growing like a wild fire its high time to leave political agenda and come together to solve out the problem whether it is outside force or other internal communal causes.

Permalink Submitted by Juel Narzari on Wed, 08/10/2008 - 00:46
People of Assam have been raising voice against the illegal immigrant Bangladeshis since three decades. But both Central and State Government have not paid any heed so far. They are fully aware of the situation but for the hunger of power Government have ignored the issues. It is not only clash between indigenous Bodo Tribes and Muslims but threats for the inhabitant of Assam. None of us are against of any Muslim but migrant Bangladeshis who have intruded in our land. How can one from foreign land claim and grab our own land. The chief Minister is unable to control the situation now blames NDFB which is in ceasefire with the Central Government. This is baseless statement made by the Chief Minister without any proper probe.

Permalink Submitted by robbie on Wed, 08/10/2008 - 02:56
The people of Assam need to be awaken on this issue, how can they just sleep doing nothing when the Bangladeshi immigrants are threatening the security and integrity of the indigenous tribes. Mr Gogoi please think for the future.

Permalink Submitted by Monjib Mochahari on Wed, 08/10/2008 - 21:30
Torun Gogoi is a failed Chief Minister of Assam. By recognizing illegal Bangladeshi settlers as "citizens of India" he has proved that he is a lost leader who cannot lead Assam. He should pay the price for the communal conflagration in Darrand and Udalguri district by resigning from the chief minister.

Permalink Submitted by monjib mochahari on Wed, 08/10/2008 - 22:05
Both the central and the state government are fishy over illegal Bangladeshi settlers, as they are the backbone for the congress votes in Assam. As a result of which the indigenous tribes in Assam are paying the price for no reason. It is unfortunate that the state government is still playing politics with Bangladeshis rather than fighting against them. It's a mockery that the Chief Minister, Torun Gogoi has acknowledged Bangladeshis as 'citizens of India'. How can a chief minister ever do such a stupidity when the people of Assam are fighting for their survivable even in their own motherland? He is responsible for the communal riots in Udalguri...

12 Sep 2008 - 2:59am | swapan
Mohini Rabha, wife of Kalaguru Bishnuprasad Rabha has been admitted in the Tezpur Civil Hospital in Tezpur on 11-09-08 evening after she was complaining about her health condition. Details awaited.