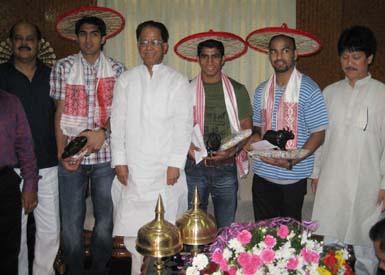 Beijing Olympic bronze medalist boxer Vijender Kumar along with other boxing heroes Jitender Kumar and Akhil Kumar were today given a formal felicitation by the Chief Minsiter Tarun Gogoi at his residence at Khanapara hillside in Guwahati this morning. The star attractions of the inaugural function of the 4th Asian Sr. Women Boxing Championship held at KNCB Indoor Stadium Sarusajai Sports Complex were feted with the traditional Axomiya phoolam gamoocha, wooden replica of one horned rhino the pride of Assam and a flower bouquet and also the tradition taamor Sharai. Praising Vijender's knock at Beijing Olympic 08' C M Gogoi handed over a cheque to the talented boxer as a reward. Gogoi and Boxers interacted while CM's officials and Cultural affairs Minister Bharat Chandra Narah and Goutam Roy also joined. The boxing heroes also shared light moment with the media persons at the drawing room of CM's residence. While speaking to this correspondent the boxers revealed that the majestic natural beauty of the place diverse ethnic culture moved them. All of them wished to come Assam in an unofficial tour to visit all the major tourist destination.

Permalink Submitted by GAYETRI on Mon, 20/04/2009 - 06:35
1st of all A warm welcome to all OUR OLYMPIAN HERO AT ASSSAM. CONGRADULATION TO ALL 3OF U.U HAVE GIVEN D BEST TO OUR COUNTRY . MAKES INDIA SO PROUD.

Permalink Submitted by milk talukdar on Mon, 20/04/2009 - 07:32
No doubt they have talent. but what should we do with our Assam's talents? deprived badly in every sector! who will think of them? they are coming Assam to make money not to encourage local young talents. they are now commodity.

27 Jul 2012 - 2:51am | editor
Police on Thursday got remand of Amarjyoti Kalita when the prime accused in the infamous GS Road molestation case was produced before the Kamrup CJM court. Police sought Kalita in their remand for 5...