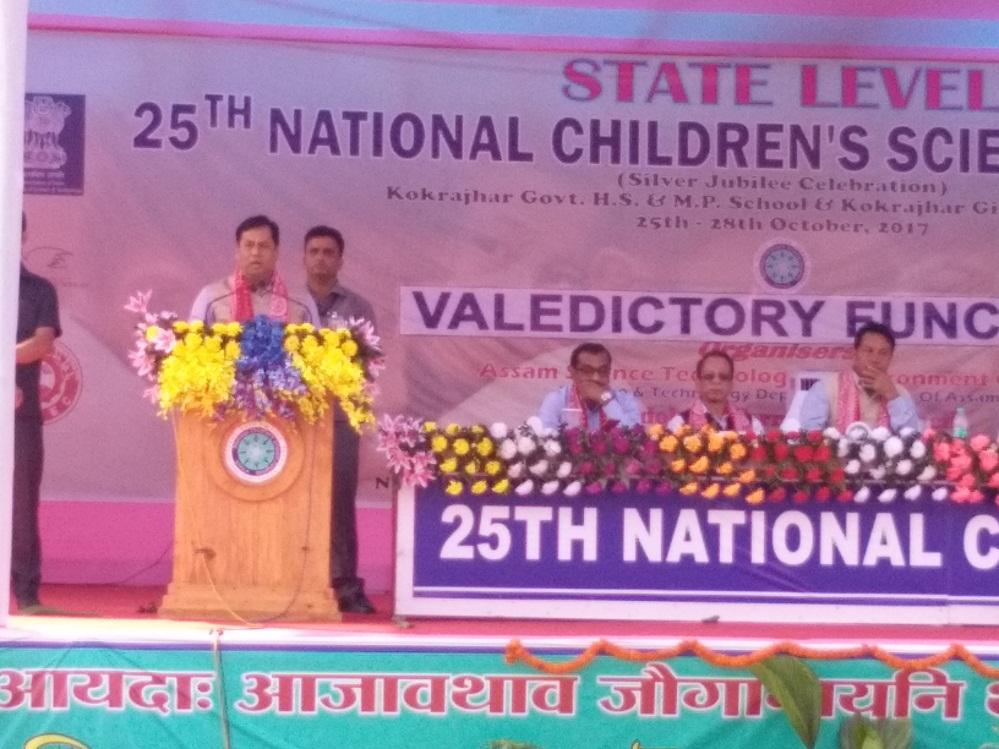 ‘Science and Technology is the backbone of state’s development as well uplift in today's scientific era in the world’, said Chief Minister Sarbanada Sonowal.

Sonowal was speaking as chief guest on the concluding day of the Silver Jubilee celebration of the National Children Science Congress (NCSC), Assam chapter being held here on Saturday. Sonowal landed at SAI centre Helipad ground by a special Helicopter at 11.50 am in Kokrajhar.

He said child scientisists of the state should come with dedicated and studious career to make state a developed state in the country.He has urged child scientists to create productivity projects to showcase their science and technology with sustaible innovations.

He said state government was working for the all round development and welfare of the state.

Sonowal has been emphasized of peace,unity and prosperity in the state among all sections of communities. He said citizens of the state must prevail healthy thinking and suitable environnement to build up healthy human resource development in the state.

‘Peace and unity is the main source of development, so citizens should come forward to the integration. We must build good and united society to pave way integrated state’, Sonowal said.

He said that Kokrajhar will be upgraded into smart city in coming days as state and centre governments have been taking stern measures to make smart cities across the country.

He said that constructions of Kokrajhar planetarium would be completed shortly. Concern department has been asked to complete all kinds of construction works of planetarium in short days to pave way opening for the citizens, he said.

He also said that state government has been initiating to construct a length of 294 Kms long Indo-Bhutan four lane road communication in the region to gain healthy road communication.
He has lauded organizer and citizens of Kokrajhar for bringing successful event in Kokrajhar with grand conclusion.

BTC chief Hagrama Mohilary said that the child scientists are future generations of the country.He has urged participated child scientists to be dedicated and studious while taking higher career in their life.

The Silver Jubilee celebration was concluded on Saturday with four days programme scheduled. Over 300 child scientists participated from 33 districts of the state and presented 252 projects on various innovative project and subjects.

Dr Ashini Kumar Baruah, founder of Assam state NCSC and pioneer of science congress,was felicitated with traditional Aronai and citation on the occasion. Dr AK Mishra, director of the Assam Science & Technology and Environment Council (ASTEC) appreciated reception committee for making smooth successful programmes of the state NCSC. He said that 252 projects were showcased in the session, in which 172 projects reached from rural and nearly 80 projects presented from urban area child scientists.

‘Participants from across the state presented beautiful and attractive projects highlighting suitable innovations of science and technologies in today’s scientific era. All presented projects were impressive and innovative’, Dr Mishra said.

24 Apr 2021 - 9:44pm | AT News
Security forces have rescued two abducted ONGC officials from Nagaland last night.  Sources revealed that the officials were rescued in a joint operation carried out by the Indian Army and Assam... 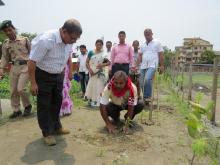 30 Apr 2017 - 2:02pm | AT News
The M. Com Department of Guwahati Commerce College organized a Talk on 'Environmental Challenges of Our Times' yesterday to mark the ongoing Silver Jubilee Year of the institution. The welcome...