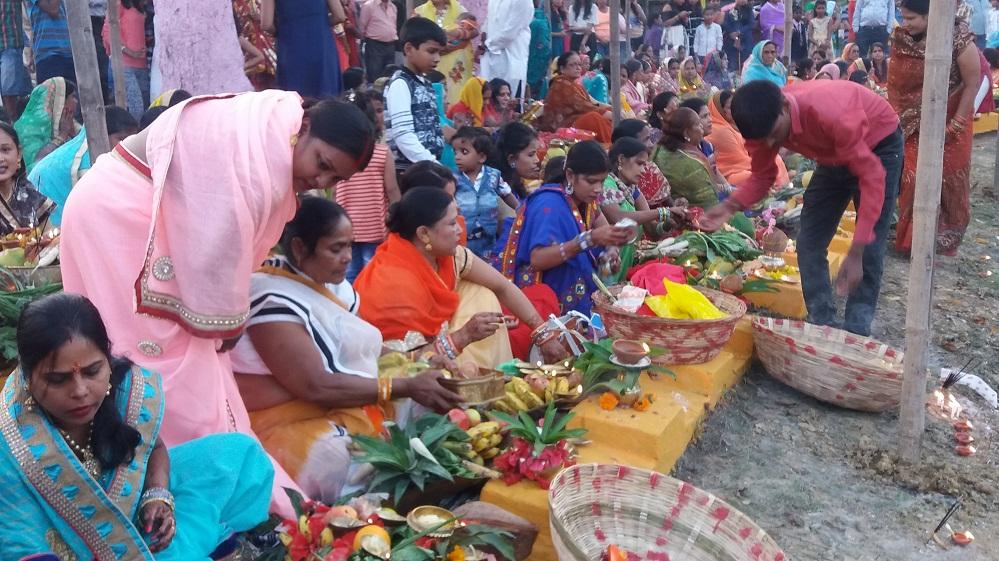 Celebrated on the sixth day after Diwali, the festival is of great religious significance among people hailing from eastern parts of the country "CHHAT PUJA" ended today. In Hojai District, the festival was celebrated with huge pompous, devotees thronged the ghats on thursday evening as well as today morning around 3 AM, to pay oblation to Sun God, who is considered as the source of life on this earth and is regarded as the deity who fulfills all our wishes.

In Hojai, devotees from different communities thronged to appease Sun God. Sun idol was placed for prayers in both the ghats i.e the Shiv Bari Ghat and Natun Bazar Ghat. Apart from this, in siliguri basti, amtola basti, tali basti, mandoli gaon also devotees following all the rituals prayed Sun God. The ghats were fully decorated with colourful lights.Special attention was given to cleanliness.

In shivbari ghat, the occasion was graced by OC Hojai Kiteshwar Baniya, where he prayed infront of the idol of Sun as well as at the ghat.

"I greet the devotees and worshippers on the auspicious day of Chhath Puja," said  Kiteshwar Baniya.


Every Ghat Comiittee of Chhat puja, were successfull in smooth organising of the puja.Also, Police authorities had made proper security arrangements.

25 Mar 2008 - 5:48am | editor
Two top ULFA rebels have been arrested from the city's Japorigog with two other linkmen during a police operation on Monday night. According to information, a hand grenade has also been recovered...