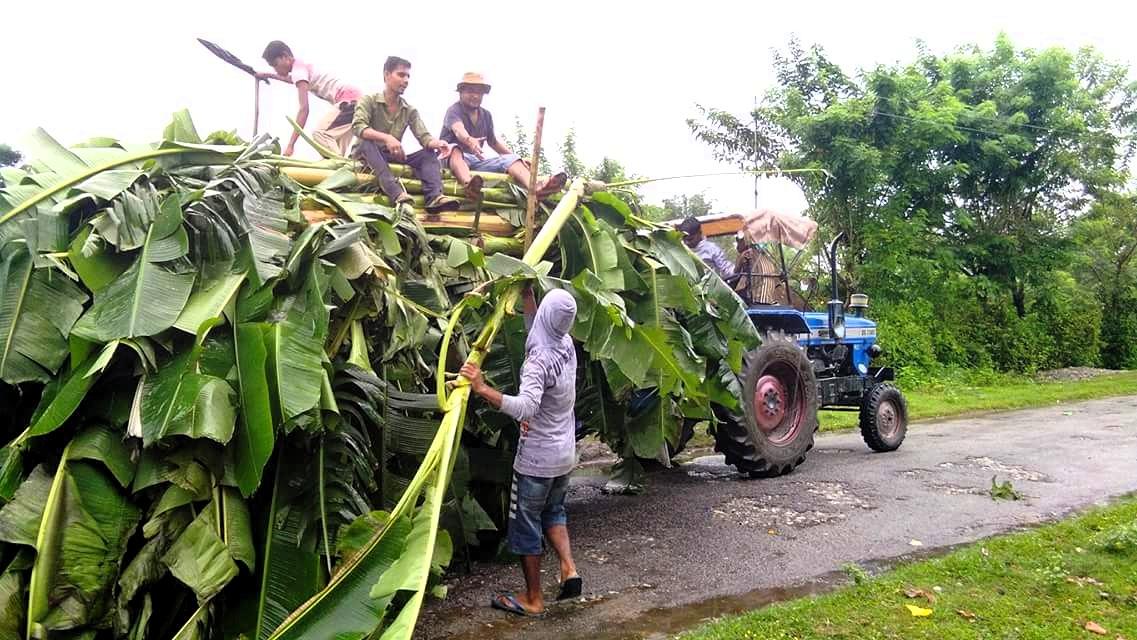 It was a rainy day on October 20.Some youths were seen picking up thrown away banana trees from each houses or roadsides in the pouring rain to be loaded in a tractor.People thought them to be from some government or tea garden agency doing cleanliness drive.No.They were mistaken.Actually it was the novice idea of a few youths of the locality,who thought it was right moment to combine social work and wildlife conservation at a time.In a very positive development,the youths living in and around Garuajhar village near India-Bhutan in Udalguri district have shown example good works by cleaning of several villages after Diwali celebration on October 20.Defying pouring rain,the youths collected all the thrown away banana trees that had been used during Diwali celebration the previous night to be offered to herds of wild elephants taking shelter in Nonai range of Khalingduar Reserve Forest.The youths shared necessary expenditures from their own pockets for transportation of the banana trees to be transported to the forest at the distance of ten km.When asked Mithu Sarkar ,one of the leading youth told this correspondent yesterday that they always had seen wild elephants roaming in the villages for food."

We saw the thrown away banana trees after Diwali celebration causing unhygienic atmosphere in the villages.So we decided to clean our villages and offer the banana trees to wild elephants taking shelter in Khalinguar Reserve Forest near Nonai forest range office", told Mithu Sarkar with pride.It is known that youths namely-Mithu Sarkar,Mahesh Choudhury,Raju Dutta, Niranjan Saikia and Jadab Mandal of Garuajhar village joined hands for the mission.They collected several hundred thrown away banana trees from Garuajhar and Dhorabasti villages to be offered to wild elephants.They also offered bags of salt with banana trees.It needs mentioning that man-elephant conflict has been very critical in Udalguri district with deaths of nearly hundred people and forty five wild elephants during last six years.Wild elephant habitats have been shrinking due to massive deforestation and human encroachment in the forest lands.In such a situation,the activities of the youths have widely been appreciated.

29 Oct 2016 - 7:45pm | AT Kokrajhar Bureau
The wait for compensation for 2008 Assam serial blast victims does not seem to an end. The Assam and Central governments have failed to fulfill their promises of compensation even after eight years...

25 Apr 2016 - 10:41pm | AT Kokrajhar Bureau
The Bodo Sahitya Sabha(BSS),a apex literary body of Bodo community demanded stern action against the Muslim fundamentalist organizations like Al-Qaeda, JMB etc. which have been strengthening their...