Good news for the peasant fraternity.  Over 45,000 farmers across the State have been covered under the Pradhan Mantri Fasal Bima Yojana (PMFBY) for the Kharif-2017 season.

Among those who registered for the scheme, there were also over 1,700 non-loanee farmers as well. Over 29,400 hectares of land have been covered under the scheme.

Ahu (autumn) paddy, Sali (winter) paddy, jute and black gram crops are the notified crops to have been covered under PMFBY during the Kharif-2017 season.

"This is the first time Kharif has been covered under the PMFBY in Assam. Besides, for the first time non-loanee farmers were also registered,” said Mowsam Hazarika, Assistant Director of agriculture department.

He added, “the number of loanee farmers registered across the State is 43,700. Besides, 1,747 non-loanee farmers have also been brought under it.”

The cut-off date for registration of farmers was July 31. “The progress has been good across all the districts. All the districts were divided into clusters for coverage under the scheme,” he said.

All the old 27 undivided districts of Assam have been compartmentalised into eight clusters for implementation of the scheme.

There is a District-Level Monitoring Committee (DLMC) headed by the Deputy Commissioner of the district and with members from the Agriculture Department, implementing agencies, banks and other concerned departments.

Specific districts or areas within the eight clusters were selected for each crop for implementation of the scheme.

For Sali paddy, the scheme is to be implemented at the Gaon Panchayat (GP) level, with each Gaon Panchayat to be considered as one unit for the purpose of Crop Cutting Experiments (CCE).

For other crops like Ahu paddy, jute and black gram, the unit of insurance will be revenue circle district and sub-division.

The PMFBY was officially launched in January 2016 by Prime Minister Narendra Modi and the idea was to implement it in all the States across India in association with the respective State governments.

Tiwa blockade on NH 37 in Raha

17 Sep 2014 - 6:15am | Dibya J Borthakur
Normal surface communication on the National Highway-37 remained heavily disrupted on Tuesday when the All Tiwa Students’ Union blocked it demanding inclusion of the Tiwa Autonomous areas in the...

15 Aug 2015 - 3:26pm | AT News
Two persons were killed and three others sustained serious injury in a tragic road mishap in Tinsukia on Saturday. The accident took place at 12 noon when the car carrying them hit a tree in Durgapur... 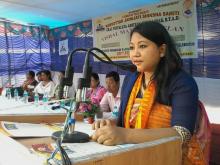