Illegal trafficking and insurgency has been a new social threat in BTAD districts namely-Udalguri,Baksa, Chirang and Kokrajhar.The recent escape of three Assamese school dropouts from such a transit camp situated in Bangladesh and their subsequent arrest on India Bangladesh border in Tripura has been a concern for civil administration and Army.Taking advantage of the economic backwardness and unemployment,numbers of school dropout boys and girls have been lured to join jobs not only in other Indian states but also in other countries like Bangladesh,Myanmar and Nepal as well.There are countless numbers of youths who go missing every year from various parts of Assam as well as other parts of NE.The youths missing are in general are those of school dropouts,unemployed youths and others from poorer sections of the society,who are lured by fraud agents on the context of offering jobs and money in big cities and abroad.The fraud agents with a promise of better life exploit and abuse innocent youths and make them fall victim to organ trade,prostitution and forced recruitment in insurgent groups.The Assamese youths namely- Manas Jyoti Deka (22),son of Chandra Deka of the village Purandia, under Tangla Police Station;Pado Deka (24),son of Kakon Deka of the village Hatibandha under Tanga Police Station (both from Udalguri district) and Gautam Roy (23),son of Khagen Roy of the village Kaliyagaon in Chirang district had been apprehended by Tripura police on May 23 this year on India Bangladesh border near Dholai in Tripura. Suspecting them to be the member og KLO,Assam,they were handed over to BSF and finally to Assam police on May 25 this year.On the other hand all the three boys had other sad story to tell.A group of media person of Udalguri District Journalist Union met the three boys on June 14 on their way back from Session Court campus to Udalguri jail.What the boys had narrated,would raised eyebrows. According to the boys some Thakur and Tomba had come to meet them at different places of Udalguri and Chirang districts in January in 2016,promising them with good job and money in Bangladesh.They told their parents that they were going outside Assam to work without specifically mentioning Bangladesh.The agents handed them over to another agent after crossing Assam Bangladesh border near Dhuburi in January 2016.After three days of continuous walking,they finally landed in an undisclosed location among thick jungles in Bangladesh.Then began the chores of untold miseries and it was too late to realize that they were handed over to an insurgent camp.It has been 17 months since they left home without any contact with their family.All the three were in the camp for more than a year doing manual works like cooking and cleaning.According to them there were other six boys from Assam holed up under the clutch of insurgents. Gautam Roy,one of the boy told media team," The normal daily routine included cooking,cutting fire wood,sentry duty, transportation of rations from ferry point,fishing.No arms training was imparted to us.We were beaten badly for for every small mistakes and were not given food". Another boy Manas Jyoti Deka said,"Life was becoming miserable day by day.I was missing my parents and I wanted to escape by hook or crook".The horrors and their nightmare that followed after leaving their home made every one with awe to re introspect on the missing youths from their homes.There will be similar cases of missing youths with no contacts and police complaints."The parents and guardians have to be extra vigilant before sending their children outside on the context of jobs.Proper verification and address of the agents should be recorded so that they remain liable and traceable in case of any eventuality",said Capt.Anil Khaiwal of 14 Dogra Regiment stationed in Udalguri, who has been supervising mass awareness, rehabilitation and rescue of such holed up youths in Udalguri district. Sadhana Hojai,Deputy Commissioner, Udalguri,who has been working hard to coordinate among administration-public-Army and media fraternity of the district to combat the menace.She said that district administration would launch awareness meetings in backward villages in association with Army,police,and media personnel to track the movements of the agents and sympathizers. She also requests all the students organizations to come out to check illegal trafficking in Udalguri.

21 Jul 2015 - 2:11pm | AT News
Amid raging controversy of the Victoria suicide case, police arrested a person in Guwahati accusing him of abetting the Meghalaya woman to commit suicide early this month.Identified as Manbha Kumar... 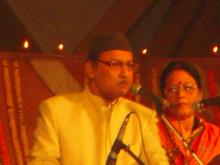