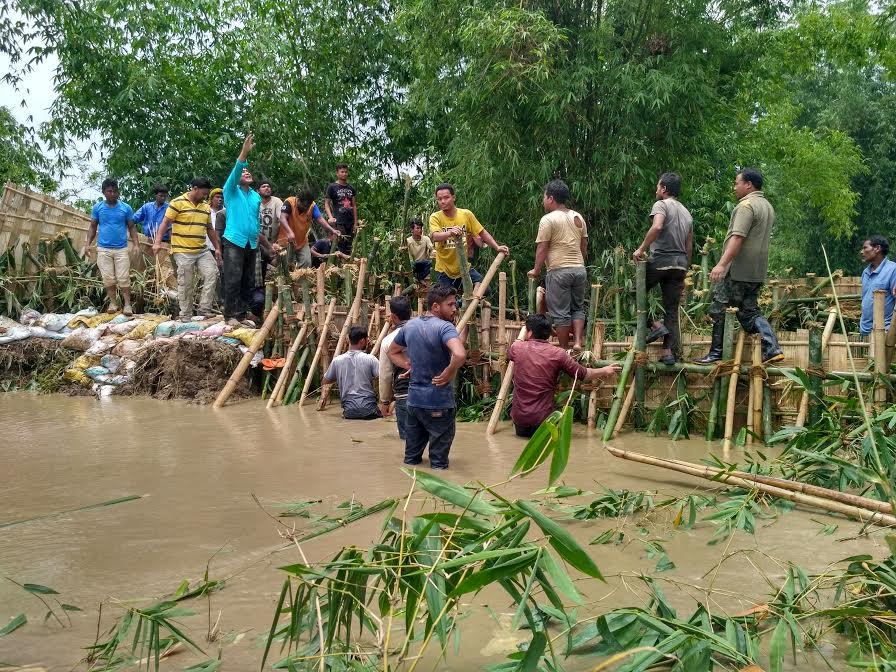 Most of the Manipur rivers were flowing close to danger level on Tuesday as heavy rains continued to lash the state since the last couple of days.

The monsoon rain continued to wreak havoc in some states of Northeast including Manipur. In Mizoram, eight persons were killed and other six were reported missing after flash floods. A least 250 houses were washed away by flash floods in the border village of Tlabung in Lungeli district of southern Mizoram bordering Bangladesh on Tuesday.

Imphal river section at Imphal East’s Keirang Pangal Umang Konjin breached nearly 50 ft wide around 1 am after the flooding from the river broke through the embankment. A temporary dike was built to prevent from more flooding in the area.

At least 30 houses were damaged in the flash flood which has inundated hundreds of houses at Keirang. The residents are dealing with the flooding.

Khurai MLA L Susildro joined the residents in the area in building floodwalls with sandbags, bamboo and earth to stop the flooding. One excavator machine was also used in building the dike.

Chief Minister Nongthombam Biren Singh and IFCD Minister Letpao Haokip also took stock of the flood situation at Keirang. The two leaders assured the affected families to provide all relief during the visit.

Though the water level in Imphal river and Nambul river was gradually receding, some parts of low lying section of the  river after Lilong area were facing a threatening situation as the water was flowing above the danger level.

The reports said residents were building floodwalls in Lilong Arapti section, the confluence of the rivers Imphal and Iril, to control water overflowing from the Imphal river. Catchment areas of the rivers in the state received heavy rain causing water to flow above the danger level.

A man was washed away by river in Kangpokpi district where several houses and bridges were damaged due to heavy shower which wreaked havoc life across the district yesterday.

The MET office, meanwhile, has predicted more heavy rain in the Northeast.

17 Mar 2014 - 8:40pm | AT News
A women was killed when police fired to disperse a group of people who turned violent after a local villager tried to kill his son in the outskirt of Guwahati on Monday.The incident took place at...