DIBRUGARH reports another first but of the dubious kind. A lady government officer of the PWD (technical) department of Assam was arrested on charges of bribery and extortion.

Mr Rajib Dutta was a happy man. He had been selected through the selection exam in the Deputy Commissioner's office for the post of a Junior Assistant. But Ms Runu Das Dutta , the lady in charge of the appointments had some other ideas. The woman reportedly demanded Rs one lakh from from him, stating that his appointment would be confirmed only if he paid the amount which would be handed across to a higher authority. Rajib, the conscience citizen lodged a complaint with the police and now the lady is cooling her heels in jail.

28 Mar 2012 - 3:05pm | Ritupallab Saikia
Rajya Sabha MP from Assam Birendra Prasad Baishya was today vocal in the Parliament over the issue of declaring Tea as National Drink of India. He raised the issue under Rule 180 (A) for mentioning a... 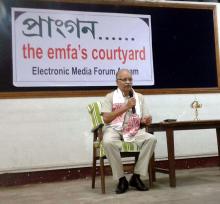