Bidisha Kachari, second standard student of Maharishi Vidya Mandir Tangla under Udalguri district of Assam makes her school proud by achieving eighth position in the All India Inter School Quiz Competition organized by Conquest I.Q. Olympiad in New Delhi. The Conquest I.Q. Olympiad provides the most conducive as well as testing opportunity to students to show their depth of knowledge and sharpness of intelligence. She has made the entire Udalguri district proud by her achievement and also set an example for other students. A felicitation program was organized to congratulate on her achievement.

26 Feb 2021 - 7:51pm | AT News
The Election Commision of India has today announced the dates of the upcoming Assam  Assembly elections along with other four states. As per the ECI's announcement elections in Assam will be... 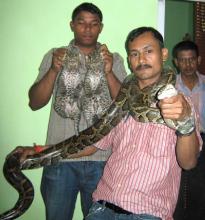