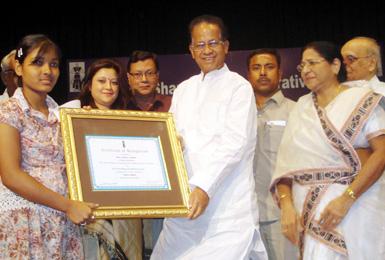 Dr. Phani Sharma Commemorative Talent Award for Sports has been awarded to the budding Tennis player from Assam Kakoli Lahkar at a function held at Srimanta Shankardeb Kalakhetra, Guwahati on August 23 evening. The award contain a one-time grant of Rupees One lakh and a certificate. This award is mainly to encouraging the young talent from Assam, preferably from a weak economic background. The award has been instituted by the Dr. Phani Sharma Welfare Trust. Kakoli Lahkar's Current India rankings in table tennis are: 11th in Under 17, 18th in Under. Current ranking in Assam: 1st in Under17 and under 3rd in Womens category.

This award has been given at a programme oragnised in commemoration of the birth anniversary of noted entrepreneur, sportsperson, organizer Late Dr. Phani Sharma. Besides being a businessman by profession, he had immense contribution towards sports, social works and other various aspects of the society. Dr. Sharma was also an important figure in the Assam state politics and at the time of his death in the year 2007 he was the treasurer of the Congress (I).

Bearing Witness: The Impact of Conflict on Women in Nagaland and Assam

31 Aug 2011 - 1:05am | editor
The Centre for North East Studies and Policy Research and the Heinrich Böll Foundation have pleasure in inviting you to a series of events to be held in a number of cities in India through...