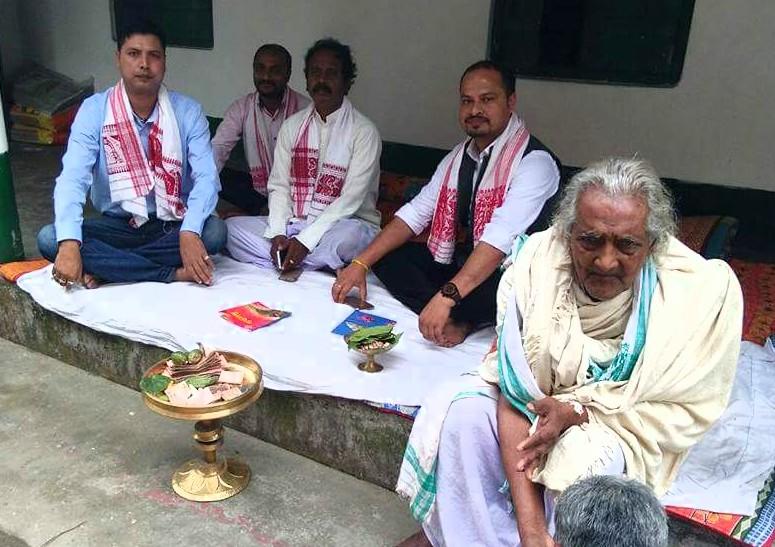 A  two-days "Akhonda Pal Naam" organised by Bhakat Siromoni Harekrishna Mahanta Deb Ata, founder of Borongajuli Xatra and winner of Pitambar Deb Goswami National Award 2016 concluded on March 20 at Dimakuchi near Indo-Bhutan border. The religious programme was commenced at 4.30 am on March 19. This has been considered to be very significant from the point of view of its celebration at Dimakuchi near India-Bhutan international border known for all types of extremist activities for a decade. Participation of nearly three thousand people from around the districts of Assam including local Bodo, Adivasi and Nepali community added flavor to the event.Its to be mentioned that Bap Harekrishna Deb Mahanta had already established 27 Xatras in Udalguri district bordering Bhutan,infested with violence,extortion,man-elephant conflict etc. Mahanta Ata,at the age of 89 years is still busy in his never ending mission of charity at a time when most other people have been running after wealth and personal comfort.He has been practically implementing ideologies of Sankardev by uniting people all backward communities including Bodo, Rabha, Adivasi and Nepali people.He established the Borongajuli Xatra in 1953 which has now been run by a committee headed by Suk Ram Boro, a former BLT cadre.The programme was attended by several distinguished personalities of Assam including Kamali Basumatari, MLA,Paneri; Thaneswar Malakar,DC, Barpeta district; Sadhana Hojai, DC, Udalguri; DN Hazarika, ADC, Udalguri; Dalim Chandra Pathak of Sreemanta Sankardeb Xosetan Manch,Assam; LJ Das,Circle Officer,Khoirabari;Pranjal Bora,SDPO,Bhergaon beside other political leaders.

5 Sep 2012 - 2:50am | editor
An earthquake of mild intensity struck the state on Tuesday triggering panic among the people of Guwahati and parts of the north-eastern region. The quake with a magnitude of 3.1 on the Richter scale...