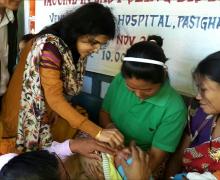 Peace or no peace: Five ULFA killed in encounter

26 Oct 2008 - 4:54pm | Pranjal Barua
Once again the blazing gunfire could bury the hope of peace in Assam if the fresh killing of five ULFA cadres is any indication. The incident took place in lower Assam’s Nalbari district that...

8 Aug 2015 - 4:52pm | AT News
The Centre on Saturday made it plain and simple that the talks with ULFA(I) is not possible abroad.Talking to reporters at Sonapur in the outskirt of Guwahati, Union minister of state for home Kiren...