Journalists’ Forum Assam (JFA) has expressed shock at the killing of a local scribe in Imphal on Sunday (December 23, 2012) in the police firing. The Assam based journalist organization has urged the O. Ibobi Singh led Manipur government to investigate the incident that led to killing of Th Dwijamani (Nanao) Singh and compensate his family.

“Nanao Singh was killed this afternoon when the police opened fire at supporters at Thangmeiband area near here in Imphal West district who torched a police vehicle and obstructed the plying of public and security vehicles. Singh took two bullets, including one in the chest,” quoting the official sources, PTI reported.

Hundreds of journalists gathered at Regional Institute of Medical Science & Hospital where Singh succumbed to his injuries. The body was later taken to Manipur press club for paying tributes. Meanwhile, curfew was imposed in eastern and western parts of Imphal till 6 am Monday following the death of the scribe, the report added. 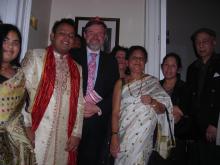 Forest Ranger falls in Brahmaputra river and is missing

25 Jul 2007 - 3:56pm | editor
Dibrugarh : A forest Ranger accidentally fell down in the Brahmaputra River from a Ferry on which he was traveling from Maijan Ghat, Dibrugarh to his workplace Pasighat in Arunachal Pradesh today....