The door of the Rajbhawan is finally open for the local people on Monday 11th August as Governor of Assam Shiv Charan Mathur will allot one hour of his daily time from 11 am on every Monday and Thursday for meeting public without any prior appointment. However, the Governor's Grievance Redressal Cell shall function daily later on, said a Raj Bhawan source.

During the one hour allotted for them, the general members of the public can approach the Raj Bhawan, Assam after ascertaining the presence of the Governor in station and submit their willingness to attend the Public Grievances Redressal Cell and on reaching the Raj Bhawan during the designated hours, they will be able to interact with the Governor.

To ascertain the presence of the Governor in station and to receive any prior information on the Governor's Grievances Redressal Cell, interested persons can contact the Raj Bhawan at telephone number 0361-2540500 between 10 am and 5 pm every weekday. 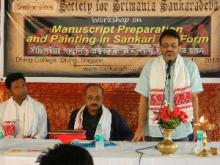 13 Jul 2013 - 10:18am | Sanjib Kumar Borkakoti
A workshop on "Manuscript Preparation and Painting in Sankari art form" was held under the auspices of SOCIETY FOR SRIMANTA SANKARADEVA from July 7 to 11 at Dhing College, Dhing. Mridu Moucham Bora,...

27 Dec 2008 - 12:42am | editor
An exciting moment of play during the 2nd semi final match between Oil India Ltd (Yellow-Blue) and Lajong Club of Shillong (Red-White) at the ongoing 57th Bordoloi Trophy Football Tournament...

31 Aug 2017 - 7:23pm | AT Kokrajhar Bureau
Many engineering students staged dharna at the Bineswar Brahma Engineering College premises in Kokrajhar on Thursday demanding affiliation under Guwahati University without any delay....