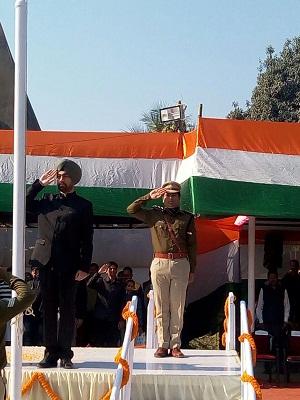 The 68th Republic Day observed in different places of Nazira Sub division. Despite the boycott appeals of several outfit organisations thousands of peoples were observed this Historic Day and participated in the Republic Day programmes. The central Flag Hosting function were held at the Play Ground of Nazira where Nazira SDO Dr.Sadnek Singh hoisted the Tricolour at 9 AM.

On the other hand, two bombs were blasted at Dholban and Bihubor of Nazira by suspected ULFA militants. No causality have been reported. Police tightened the security to nab the culprits.

16 Jun 2013 - 12:26pm | Jayanta Kumar Das
In a very tragic incident one wild elephant (makhana) lost its life in Badlapara tea garden in the night of June 14. As per information the wild elephants body was found near the factory house of the...

Another jolt for BJP

16 Jul 2016 - 1:16pm | AT News
The high voltage political drama in Arunachal Pradesh is a staggering blow for BJP. The saffron party legislators gave outside support to the Kalikho Pul Government after the Centre lifted the...

13 May 2011 - 4:42am | Pankaj Sharma
The election reslults scheduled to be declared tommorow hold the key to future of many big political leaders in the state across party lines. The major leaders from Nagaon being Rockybul...