As many as 22 students bodies and youth organisations have set a 72 hour ultimatum to the illegal Bangladeshi people in Tinsikia to quit the district. Talking to Assam Times over telephone from Tinsukia, the leaders of these organizations said if these people in question fail to follow the instruction they will face the music. The groups include the Tai Ahom Yuva Parishad, Bengali Yuva Chatra Parishad, and Bhojpuri Students’ Union, Tinsukia district units of AASU, AJYCP, All Assam Muttock Yuva Chatra Sanmilan, All Moran Students’ Union, ATTSA, TMPK.

They said the deadline hour begins on Tuesday morning. The organization leaders decided to issue the ultimatum at a meeting on Monday organized to intensify the agitation for detecting and deporting the illegal Bangladeshis in the district. 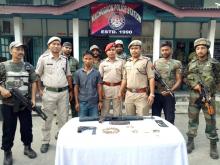 29 May 2019 - 7:41pm | AT Kokrajhar Bureau
Kokrajhar: Four persons, including a cadre of the National Democratic Front of Boroland (NDFB-S) were arrested by security forces from different two places in Kokrajhar and Chirang district on...