Independence Day 3rd Invitational National Archery Championship has been scheduled to be held from the 13th August to 16th August 2008. The venue of the Championship will be SOS Children Village, near Airport, Guwahati.

In the entire event, all total 18 teams have been invited by the Organizing Committee to take part in the championship and the championship will be in 30 Mts Double ranking and their after the elimination round. The top three individuals in men and women categories will be rewarded with medals, certificate and cash awards of Rs. 10,000, Rs.7000 and Rs. 5000.

Until now 13 teams confirmed their participation in the championship. The date of arrival of the teams is on 13trhbaugust and Departure on 16th August.

26 Aug 2015 - 8:19pm | Hantigiri Narzary
Kokrajhar police are preparing to firmly deal with the militants who have been unleashing a reign of terror in the form of anti social activities in the BTAD district.Addressing a press conference in... 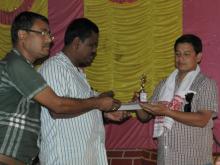