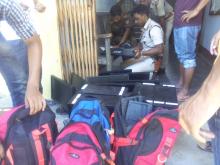 3 Sep 2014 - 6:35am | Songit Basumatary
The Udalguri unit of All Bodo Students' Union recovered ten personal computers two days after these were stolen from the Rabi Kachari Memorial Academy. In a statement, ABSU said that acting on a...