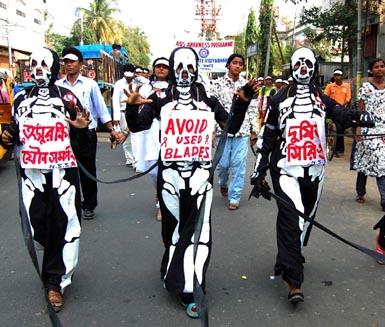 HIV/AIDS is the biggest scourge to ever confront mankind and drugs weaken a person emotionally, physically and spiritually. HIV/AIDS is not transmitted by holding hands or by sharing food items. The younger generation, who are more susceptible to these twin threats, should take care to remain away from drugs and take all precautionary measures against possible infection by the HIV. Yours truly, along with countless other Indians (who have had the chance to attain elementary education), has been subject to this kind of a statement ever since I entered school and then, in my professional life. Still, incidents of drug abuse and HIV/AIDS cases are found to be continuously on the rise. It sounds harsh but this epidemic has been transformed into one of the most pathetic jokes in the country. Thanks to the Government, the concerned professionals and all those responsible in any way.

We do get to witness a lot of hula boos once in a while but until and unless the grassroots problems are addressed and the disease is given the chance to assume a more humane form, it is unlikely that anything worthwhile can ever be achieved. The gravity of the threats along with those of other associated social evils like drug addiction have not really sunk into the mentality of the Government, the populace and even the ever vigilant media, if I may say so. Now what I am saying is not something new and most of the enlightened members of society have been deliberating on this very issue for a long time now. However, isn’t it surprising that even though the Government and world bodies are spending so much money, time, space and energy to try and prevent these diseases and when most of the citizens have some sort of knowledge about the same, nothing worthwhile has been achieved till date?

Before I am labelled as an arm-chair critic, let me clarify that we do have professionals who are trying their best to arrive at a solution and who are working with utmost sincerity to try and arrest the growth of these epidemics. However, one also needs to understand the very essence of the grave problem at hand and in order to do that, we have to first understand the ground realities. Most of the time, ground realities are vastly different from what is portrayed or conveyed to the people. What the country, especially Assam and the northeastern region, really needs is a holistic effort to counter this epidemic and not just some stop-gap, superficial measures.

One may wonder what I mean by grassroots issues. Why I say this is very important and evident for all to see. For example, everybody knows that commercial sex workers (CSWs), migrant workers, intravenous drug users (IDUs), and truckers are most vulnerable to HIV/AIDS. If everybody knows about it and as the people working for the prevention of these threats would like us to believe, why is it so that there is not a single condom distribution booth on the National highways? It is useless to keep on harping that needle sharing is a major factor for the progression of the disease for the National AIDS Control Organization has stated that only around 2 percent of all HIV infections are a result of needle sharing among IDUs. However, being a member of the fourth estate, I will limit my observations only to the working of our profession.

Herein, I would like to narrate a very recent experience that I had. Earlier this year, held a one-day workshop for the media persons belonging to two states of the northeast and the said workshop was proof enough of the mockery this epidemic has become. For one whole day, the organizers strived to inculcate in the mentality of us scribes, information, which is common enough knowledge for even school going children. Facts, figures and data’s as usual, played a chief role in the workshops agenda and one was left wondering what possible use could these figures have in an attempt seeking to bring about changes in the thought pattern of a scribe? Can these facts and figures sensitise people against this disease? Can they bring in the human touch? The workshop was held in a four star hotel and was attended by around sixty journalists from Guwahati and Shillong. This kind of an attitude, in which only rudimentary knowledge is kept on being discussed, will surely lead to nowhere. As a participant pointed out, there is absolutely no need for a media sensitization camp for the experience of attending similar camps tells us journalists that everyone ends up moving in the same vicious cycle, with no constructive objectives ever coming up. The media members would hardly complain for we had a good lunch, something which is not possible with our meager earnings. It is up to the reader now to read between the lines.

The media has a very important role to play in the fight against this epidemic. However, I am in now way saying that the media is all right and proper. The media too is to blame in as similar a fashion as the other people working for the prevention of HIV/AIDS. I have found from my professional work experience that most media houses cannot afford to depute their journalists and reporters to go in-depth into these issues. This leads us to question the very idea of people running media houses if they do not have the time or energy to delve into social issues, which are bound to have grave consequences.

I would also like to touch on the issue of sensitivity. Personally, I grew up reading newspaper headlines, which proclaimed that so and so numbers of HIV positive cases were detected in the state. It has been the same ritual since the time I started to read and write. The media will also questionably justify that we are provided with only facts and figures and as it is, facts and figures make life so much simpler anyway. How can one possibly expect us to be sensitive while writing about facts and figures? This is a point, which development professionals should try and keep in mind while lambasting insensitive portrayal of the epidemic by the media. And most of the time, even the facts and figures do not reach the media houses. So one is left thinking as to how these professionals can even think of informing the people of the country when they leave out the members of the fourth estate.

It is useless blaming others or the concerned professionals for it is not going to lead us anywhere. It is imperative that we devise new strategies to address the grassroots issues and allow the disease to assume a more human form. It is only when we move from facts and figures that we can even hope to achieve anything tangible.

18 Oct 2014 - 9:38pm | Nilotpal Kalita
Sensation prevails in Tihu after an unidentified body was found floating in the Tihu river on Saturday morning. Local residents spotted the body at 11 in the morning and moved police who later...

25 Oct 2013 - 3:00pm | AT News
Tension prevails in Azara after police recovered two bodies of unidentified girls from J ogipara who were raped and murdered on October 22 midnight. The situation started simmering as soon... 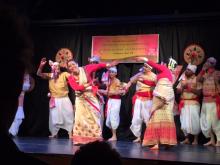 18 May 2017 - 11:43pm | Anne Rainsbury
Discover Assam – in Chepstow, a small town on the border of England and south Wales, welcomed members of the Assamese community from around the UK on Saturday, who brought with them a vibrant insight...