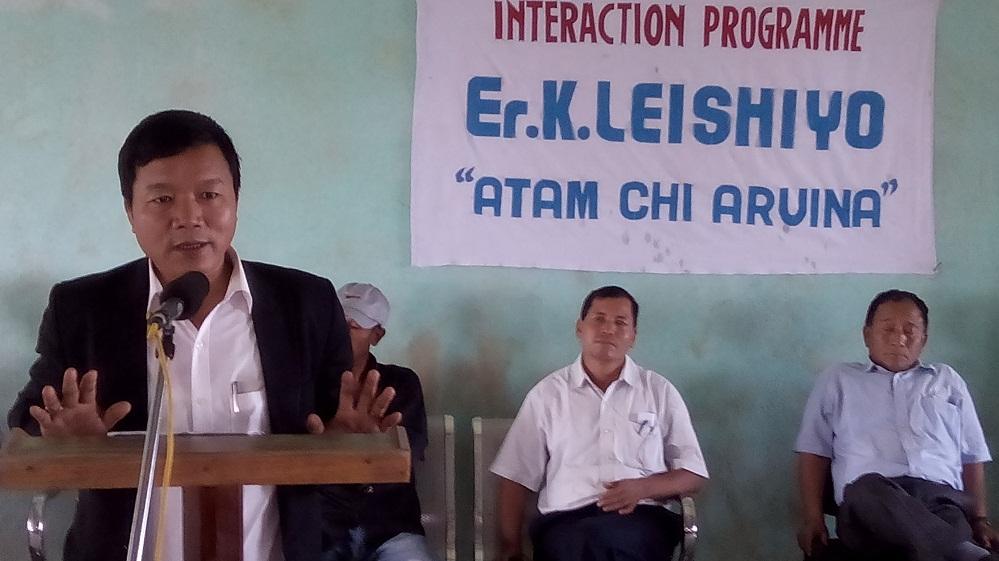 In what could be described as a crowd-pulling event, more than one thousand people from over a dozen villages in Phungyar subdivision gathered at the local market shed to pledge their support for Er. Leishiyo Keishing an intending candidate for the ensuing Manipur Legislative Assembly elections during a lively one day public interaction programme held at the sub divisional headquarters on Friday.

Braving the heatwave, more than one thousand people from about 20 villages under the subdivision from Koso village to extreme eastern village Sorbung including village chiefs, social workers, public leaders and Church elders converged at the venue at 10 am.

The meeting comprised of speeches from the intending candidate and social leaders in the first session followed by a lively public interaction and discussion in the second. Towards the close of the interaction, the villagers through a declaration unanimously took the pledge to support Er. Leishiyo Keishing in the upcoming polls.

Addressing the gathering, Er. Keishing drew the attention of the public on the question of what is stopping our tribal people from leading an honourable and self reliant life in our own encestral lands. 'Despite being endowed with rich natural and human resources, we continue to lag behind in all aspects of life and suffer from inadequacy,' he said.

Blaming misgovernance largely for the mess, he categorically stated that politics of schemes and contract works is running rife in the present day government system and added that politics should be nothing less than making policies for the good of the people.

Noting that majority of the present day youngsters from the district have gone for 'nomadic lifestyle' staying put outside the state, he lamented that they are unlikely to return home until their prime period is over.

Most youngsters rush off to cities for studies or in search of jobs to make a living, he said and questioned: "Isn't it time we do something to create job avenues and other opportunities for them and improve the quality of life in our own lands? Unless we do this, what legacy would we leave for them?"

While spelling out his visions for the people, Er. Keishing testified to his commitment, saying: "I have forsaken my job, comfort of my home and company of my family, just about everything to serve my people, if given a chance."

He underscored the urgency of extending basic amenities and infrastructures in education, water supply, electricity and communication to the people of Phungyar on priority basis.

Among his envisioned targets, he listed conservation of land and forest, optimization of benefits under Act East Policy, employment generation and emotional and geographical integration of the indigenous hill people as vital areas to usher in positive change particularly in Phungyar and Ukhrul district in general.

Phungyar village chief Shimreishang also exuded hope that Er. Keishing would secure the ticket to fulfill the wish of the people. Khukok Long chairman exhorted the gathering to beg for Almighty's blessing, and several other speakers also displayed the same sentiment.

Interestingly, even as Er. Keishing who hailed from Nambashi Horton village, is currently seeking a Naga People's Front (NPF) ticket to contest the forthcoming Assembly polls from 43 Phungyar Assembly Constituency, many of his supporters and well wishers have already begun vouching for the ticket in favour of him.

Held under the theme 'Atam Chi Aruina'(The Time Is Now), the meeting was the third of three major interaction meets of Er. Keishing with the public of the constituency, two of which were held earlier this month at Kasom Khullen and Kamjong electorates respectively.

25 Oct 2014 - 10:17pm | Hantigiri Narzary
Despite heavy presence of security forces, a section of armed NDFB-S militants been moving without any hindrance in BTAD areas.Security forces apprehended a hardcore cadre of NDFB(Songbijit) militant...

16 Jul 2016 - 9:22am | AT Kokrajhar Bureau
BTC Chief Hagrama Mohilary said his council has not been received satisfactory fund from government of India, which has facing hardship while maintaining in healthy administration. Mohilary, talking...