Worries of an octogenarian

Mahendra Saikia a renowned social worker of Kalaigaon has been sad now a days in his eighties.His dream of a peaceful and corruption free society has been shattered.Very recently he has been awarded with the “Chief Minister’s best Community Action Award for Development /2016” on the occasion of 70th Independence Day.When asked his feelings on receiving the award,Mahendra Saikia just expressed his anguish at present day social degradation.Speaking to this correspondent Saikia said that political promises were made only for power and such promises never materialised.”Political leaders and members of other social organisations lack good education and wisdom”, he regrets.Speaking on unemployment he said that education system had never been a support to students,which compelled youths to move to other states for low salaried jobs.Corruption for easy money also grieves the octogenarian leader. According to him corruption has been like a never ending social menace crossing all limits with so many thousand core scandals under investigating agencies.He advised media and honest people to think positive and inspire honest politicians and officials. Mahendra Saikia loves nature and wildlife much.Even at this age he has been maintaining a spectacular flower garden at his residence at Adarshagaon village in Kalaigaon. Saikia was born on January 14 in 1936 at Duni in Darrang district.Later he moved to Kalaigaon in 1952.He was a follower of Acharjya Vinoba Bhabe and had been following Vinobaji during his tour in Darrang district in 1960.During Chinese aggression in 1962 Saikia offered his service at the call of Freedom Fighters-late Pani Ram Das,Late Bangshidhar Sarma and Late Kamaleswar Sarma helping NEFA evacuees.He has been serving people inthe capacity of president and secretary of so many organisations and institutions in and around Kalaigaon since 1958.New generation people have so much to learn from his tireless crusade against social menaces.

20 Aug 2014 - 7:51am | Smrity Rekha Kalita
A social science cluster level exhibition is being organised by Kendriya Vidyalaya Namrup at Today at B.V.F.C.L Officers Club. The event featured cultural competition  and exhibition by students... 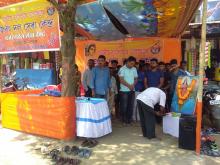 17 Oct 2018 - 6:03pm | Nikhil Mundra
Hojai: Amid pomp and gaiety of Durga Puja Celebrations Bajrang Dal Hojai Unit comes up with  a Service Centre  at New Market in Hojai.On Wednesday morning around 11 am this Service centre...