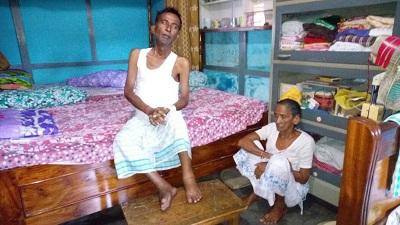 Senior journalist and former president of Kokrajhar Press Club, Gabinda Nath has been suffering of liver damaged and kidney disease since two-three months in Kokrajhar.He is now undergoing treatment at his home in Kokrajhar.

Nath,who started his journalist career in 1995 with Dainik Asom and since then represented various newspapers which included Amar Assam,Dainik Agroddot,Asomiya Pratidin,Dainik Batori and served as stringer in CNBC electronic media.He has been taking medical treatment in various hospitals,like Kokrajhar,Bongaigaon,Coochbehar and recently admitted to Dispur Hospitals to take better treatment, but no good remedy was saw. He was suffering of liver damaged and kidney problem in his health.Attending doctors told that he should be sent to Chennai or some higher hospital to transplant his liver, otherwise no way to get relief,but family condition was no way to give better treatment,that is why he has been giving treatment at home at Ward No.8 in Kokrajhar.Family members prayed for financial support from government or well wishers to give better treatment for him.A delegation team of Kokrajhar Press Club visited at his home and took information about his health condition.Press Club members prays for his speedy recovery from diseases.

“I have been suffering from liver damage and kidney diseases since two-three months.I took treatment at various hospitals in the state,but no recovery was saw so far.I am facing financial crisis in my life while taking better treatment.So.i would like to beg financial support from government and BTAD administration as well wishers to take good health treatment”,Nath said.

“He has been given treatment in different hospitals since few months,yet no good recovery was saw so far. We are facing financial hardship while giving medical treatment as family has no any financial sound feasibility.We pray to govt and BTAD administration to extend financial support so that they can give treatment in better way”,family members told.

“I met him since 1996 when I started my journalist career,now he is suffering from liver diseases. I pray for his early recovery,besides appeal to donate financial support from govt and BTAD administration so that he can get better medical treatment in his life”,Mustapa Hussain,a journalist in Kokrajhar said.

5 Apr 2012 - 3:50am | editor
A Citizen’s Meet has been organized at Guwahati Press Club on April 10, 2012 to discuss about the recent incidents relating to Tibetan issues. Organized by Journalists Forum Assam (JFA), the...