The game of numbers was never at its vulgar ebb as it is today. It is clear by now, more than ever before that electoral politics is nothing more than valueless and opportunistic arithmetic. Votes and candidates, parties and parliamentarians are being traded in the electoral bazaar of India as if politics is a game sans values. It probably is.

This is the irrefutable message that almost all the political parties have sent out this past week to the millions across India, the millions of dalits, adivasis, farmers, labourers, fish workers, hawkers, women and others who are economically, socially and politically marginalized, yet repose trust in their elected representatives and continue to vote for them, with a trust in their promises, if not their perspectives. This trust of the vast majority of India in the political establishment, which is manifested in their manifestos (though does not translate into reality) has been shattered yet again and the hidden faces and agendas are in the open for all to witness.

What initially began with the support for or opposition to the nuclear deal, has now turned into a full-fledged political 'tamasha' with almost all the parties realigning and reformulating political associates. Though it is being claimed that the ongoing process of political realignments is not just over the nuclear power deal, a vicious attempt to push the deal, staking all values and democratic norms is top on the agenda, which we cannot afford to overlook.

Those parties that had a popular image of a certain 'ideology' are proving that ideology and people's issues are a trifle if they cannot fetch the 'numerical victory'. The hoax of nuclear energy has already been busted, but the Congress is bent on pushing it at any and all costs and its newfound 'allies' care a pittance about India's sovereignty and national interests, let alone the
hazards of nuclear energy. They are more than content with grabbing a ministerial berth or two and throwing ideology (which some of us thought, had existed) to the winds. These erratic and valueless somersaults by political parties is also a blatant transgression of the internal party democracy, as many of the cadres, obviously, do not endorse such opportunity-driven shifts.

Though the Left has taken a consistent stand on the issue of the nuclear deal, they still have not taken a clear position against nuclear energy and related concerns, which are equally grave issues.

The mammoth electoral drama that is on in the capital of India will culminate very soon, probably even tomorrow and hit the headlines any moment. Presuming the Congress would be able to tide over this crisis, the Prime Minister has already announced his ambition to go a step ahead with his pet-agenda, 'Reforms'. This time, more reforms in the Insurance, Banking and Pension sectors. In the political imbroglio, we, the people's movements, cannot afford to ignore these vital issues as well.

Amidst all this drama, the real and pressing concerns of the people, be they of spiralling price-rise, rising communalism, fascism and regionalism, corporate loot of land, water and other natural resources, or of lop-sided 'reforms' to name just a few, are not only side-tracked but are in a way actively promoted by these very same parties at various levels. These events, have however, acted as an eye-opener once again to people's movements, proving the opportunism of those in electoral politics.

Given these fast-paced and value-sapped moves by parties, people's movements are already rethinking their strategies to combat this pattern of vulgar electoral gambles by forging strong alliances among various mass-based groups across the country.

We must continue to put forth and assert our multi-point transformative and self-reliant action agenda as against the single-point agendas of electoral parties and dependence on multilateral institutions like the World Bank and WTO, and must in fact have no engagement with these institutions. It is about time the people's movements ponder with collective earnestness of the future of popular issues and movements, and move toward empowering ourselves towards this
end. Asserting our allegiance to non-compromising values of peoples' struggles and non-negotiable positions on basic rights, we all should accord utmost priority to the real issues that country is facing and ensure the rights and dues of a vast majority of agricultural and unorganized labourers, construction workers, fish workers and other sections who are affected.

People's right to decentralized and democratic development, opposing caste and gender oppression, towards managing our resources is at the core.

The National Alliance of People's Movements expresses its deep anguish and disapproval of these happenings and reminds political parties of the promises that they have been making to the people of this country. Even as we wait and watch this game of numbers, we must also feel stronger, in the realization of the fact that a vast majority of this country's populace is neither privy to nor does it approve of such political machinations. This is a call to the diverse people's struggles and movements across India to see political parties for what they are and continue to struggle for our economic, social, political and cultural spaces and rights by concretely furthering the process of non-electoral people's politics as a mainstream and inevitable alternative.

(The author is the recipient of Right Livelihood Award for the year 1991. She received the 1999 M.A.Thomas National Human Rights Award from Vigil India Movement. She has also received numerous other awards, including the Deena Nath Mangeshkar Award, Mahatma Phule Award, Goldman Environment Prize, Green Ribbon Award for Best International Political Campaigner by BBC, and the Human Rights Defender's Award from Amnesty International. She is the national convener of National Alliance of People's Movements (NAPM) and has led Narmada Bachao Andolan (NBA) for more than a decade.)

Permalink Submitted by Vidhu Rawal on Wed, 06/08/2008 - 20:32
YELLOW JOURNALISM We've just witnessed another unjust and evil face of Indian Journalism.... What more could we expect of such journalism, which is so obsessed with putting each political party in the same bracket, that it has equated false stings n CDs of UPA & SP with truthful, obvious & convincible efforts of the BJP in exposing the real face of the so called "Secular" politics........ The evidences are in front of everyone, also one has seen the falseness counter-stings of UPA. - Sanjeev Saxena is absent for everyone after 22nd July, but still is available for Uma and Amar to perform sting operations after 22nd July..!! - He came in a car registered on the name of Amar Singh's wife..!!!! - His Son himself has given Sanjeev's office address as Amar Singh's house, in his College registration way back in April..!!!!!!! ------- so whose man is Mr. Sanjeev Saxena????????????? If anyone still wants to remain Blind to the facts, then so be it..!!!! At least people of this country (off course, those who can't fooled so easily), have seen the real character of this "YELLOW JOURNALISM". Even after 60 years of self-proclaimed 'free press', one is still waiting for the day, it would call a spade as a spade. Also it would then call, the only party advocating for "Uniform civil code" as the real "secularist" party of India.. Hope we have that day.. 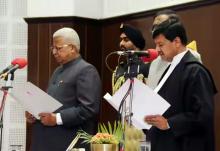 2 Mar 2018 - 9:25am | AT News
PRASENJIT SAHAAGARTALA: Justice Ajay Rastogi took the oath as new Chief Justice of Tripura on Thursday who vowed to expedite the justice delivery system in the north eastern state. Governor...

SSB instrumental in thwarting of smuggling

23 Mar 2017 - 9:49pm | Shajid Khan
Sashastra Seema Bal, deployed on Indo – Nepal and Indo Bhutan border, with mandate of securing these borders is not only guarding international borders with friendly neighbours, but has been...

22 May 2013 - 5:18pm | Ranjan K Baruah
A Leadership Training Programme for youths, organised by Foundation for Social Transformation- enabling North East India, was successfully held on 20th and 21st May, at Bosco Reach Out in Guwahati....