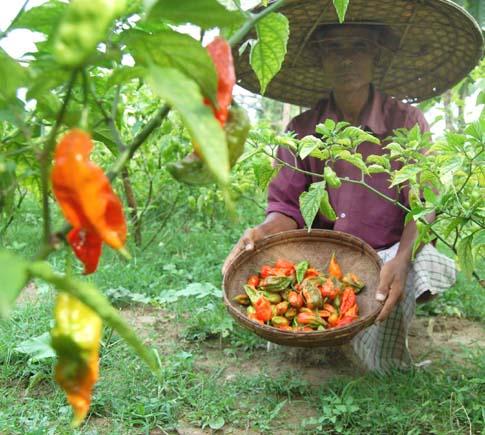 Bhadreswar Dihingia, A farmer collects "Bhut Jolokia" or "Naga Chili" peppers in his field at Bakata in Sivasagar district of Assam on 17-07-2008. Bhut jolokia, a thumb-sized chili pepper with frightening potency, rated the hottest chili in the world by Guinness World Records. It is widely eaten as a spice, a cure for stomach troubles and, seemingly paradoxically, a way to fight the crippling summer heat too.

Permalink Submitted by Dr.T.Christopher on Sun, 28/09/2008 - 21:53
Kindly provide me some seeds of bhut jalokia/naga jalokia for research through VPP. With Regards Dr.T.Christopher Department of Biotechnology, Kakatiya University, Warangal-506 009, Andhra Pradesh.

Permalink Submitted by nitu konwar on Mon, 29/09/2008 - 22:48
I need some information regarding chili production in various districts of Assam for academic purpose.please send to my id if you can.

Permalink Submitted by TEJPAL SHAH on Sun, 02/11/2008 - 17:17
I want more information, on growing BHUT JOLOKIA, in greenhouse or polyhouse, in SANGLI MAHARASHTRA

Permalink Submitted by Sumit Bazari on Fri, 27/03/2009 - 21:54
Dear Sir If you have any details regarding the producer, wholeseller or dealer of Bhut Jholokia then please let me know. Thanks & Regards Sumit Bazari

Permalink Submitted by Manoj on Tue, 31/03/2009 - 23:34
Please suggest from where we can buy Bhut Jolokia seeds, in Delhi. If it is not available in India then other parts of India.

Permalink Submitted by Delta9 on Wed, 13/05/2009 - 17:36
I purchased naga chilli form my local Turkish veg store and dried one out. Seeds germinated and grew fine I now have 8 little seedlings :)

Permalink Submitted by animesh naithany on Wed, 29/07/2009 - 10:32
Where can I buy bhut jalokia? Please suggest or contact on [email protected]

Permalink Submitted by C.D.Sasikumar on Wed, 26/08/2009 - 12:57
I would like to know where I can get a few seeds of Bhut Jolokia chillies to grow in my home-garden for personal consumption.

Permalink Submitted by antony Frank on Sun, 06/09/2009 - 10:21
I would like to buy some Bhut Jholokia seeds in Goa or anywhere nearby pls let me know where I could get these. thanks

Permalink Submitted by wilson david on Wed, 28/10/2009 - 04:14
Dear sir, Would you please mail me the adress or the phone numbers of Jolokia pepper dealers, farmers or merchants that I can buy from them. Thanks

Permalink Submitted by LAN CHIN-CHERNG on Sat, 07/11/2009 - 23:35
MR.LAN CHIN-CHERNG,FROM TAIWAN, I LIKE TO PLANT SOME SMALL QUANTITY OF "BHUT JOLOKIA" IN TAIWAN,IS THERE ANY PERSON FROM "ASSAM,INDIA"CANSELL TO ME 250GRAM FRESH,VIABLE SEED OF "BHUT JOLOKIA",SO THAT I CAN HAVE THESE PLANTS IN TAIWAN, IN THE NEAR FUTURE, I CAN ALSO BUY DRIED FRUIT OF THESE PLANTS FROM THIS, SAME PERSON WHO SUPPLYING ME THESE PLANTS SEED, MY E MAIL ADDRESS: [email protected] 2009/ NOV./ 09

Permalink Submitted by Mritunjoy Naray... on Thu, 01/07/2010 - 05:51
Dear All, I am a cultivator and small merchant of Bhut Jolokia or ghost chilly from Assam. Any body interested in buying Bhut Jolokia can contact me in my e-mail [email protected]

I m from goalpara dist. I am

Permalink Submitted by jamuneswar biswas on Fri, 12/12/2014 - 18:33
I m from goalpara dist. I am interested to do cultavation of bhut jolokia.so, i request you pls help me.

Hello, I leave in Belgium,

Permalink Submitted by Vipul Amin on Mon, 19/01/2015 - 11:17
Hello, I leave in Belgium, and would like to try and grow the Bhut Jolokia, in my greenhouse, and would therefore be grateful if you could send me some seeds. My address is as follows: Dokter Van Raesstraat 21, Hoboken 2660, Antwerp, Belgium.

We deal in bhut jolakia/king

I am cultivating Bhoot

24 Dec 2012 - 2:24pm | Syed Miraz Ahmed
Poetry dominated the Sahitya Akademi Yuva Puraskar 2012 which was recently announced by the Sahitya Akademi. In a communiqué to Assam Times, secretary in charge of the Akademi, K. Srinivasa Rao...

26 Aug 2008 - 5:07am | Nava Thakuria
A senior US officer from the Information Office of American Embassy in New Delhi will attend a media interaction programme of Guwahati Press Club on September 11. During the programme, starting at 11...