On June 26th, 2008, Nehru Centre, the cultural Wing of the High Commission of India in London presented a stunning confluence of semi-classical of violin recital “jugalbandi” with Minoti Khaund, the award winning violin maestro whose musical career spanning 50 years and her daughter Sunita Bhuyan, the recipient of the Indira Gandhi Priyadarshini award for music and has been giving performances both solos and duets with her mother on the world stage.

Sunita is one of the few musicians who balances a full time HR career along with her inherited passion for music. She is the Head of Learning and Development at Syntel, a global ITES company which entails her to train managers on leadership and all round development.

The function was inaugurated by Monika Kopil Mohta, Director and Minister of Culture. She spoke highly about the art and culture of North-East and welcome the invited guest artists of Assam: Minoti Khaund & Sunita Bhuyan.

Sunita Bhuyan in her speech conveyed her gratitude to the Director for giving them the opportunity to perform at this prestigious venue. She also thanked Rini Kakati, a prominent lady of the Assamese community who is instrumental to make this possible.

Both mother & daughter held the audience in complete thrall with their performance of jugalbandi in what was a fitting finale to the long list of cultural activities at the Nehru Centre. Virtues of simplicity and grace that made both Minoti & Sunita the most enchanting artist of the musical world of Assam, showed up in ample evidence during the performance by the yesteryear Assamese sensation.

The evening was started by raag Hanswadhani in Rupak and Teental. The Teental composition was an old and popular Khyal “Laagi Lagana”. This item resulted in the jhala crescendo which left audience spellbound. The next item was a scintillating light classical piece called Bharat Darshan. This had various folk tunes from different parts of India with a special piece of Assamese Bihu.

The grand finale was rendition of Vande Matarm: a superb vocal presentation of the powerful lyrics by Sunita. The audience were moved and became emotional. The duo were accompanied by well-known tablist from Bangladesh: Yusuf Ali Khan. The Asian & European audiences were overwhelmed by the performance and expressed that they had enjoyed the evening as a memorable one.

The invited guest of honour was Lord Dholakia & Lady Ann, Madhava Chandra, the minister representing the Indian High Commission, Jahnu Barua, the well-known film producer & director of Assam. In a traditional Assamese way, the dignitaries were felicitated with phulam gamosa.

In his closing speech Lord Dholakia mentioned about the richness of the north-east especially Assam and the importance of showcasing unity in cultural diversity. He mentioned his fruitful visit to Assam in the year 2005. As a state guest he was invited by Tarun Gogoi, Hounr’ ble Chief Minister of Assam to inaugurate the North-East NRI Convention at Guwahati organised by NECCI (North East Chamber of Commerce & Industry). He praised Minoti & Sunita specially the mother for her tremendous effort to train Sunita not only in violin but also a vocalist. Their next performance surely will be at the House of Lords. Lord Dholakia promised.

The jugalbandi performance was given a standing ovation by the huge audience when they played at the Hindu Cultural Centre, London on 14th June, 2008

The Milapfest of Manchester and Nottingham Arts Council slot were on hold due to Sunita’s busy schedule and other commitment. They have invited both artists to perform at the festival in the year 2009.

Minoti Khaund is an inspiration and her flawless performance is a silent but forceful message for all our upcoming violinist to follow.

Permalink Submitted by TLANG ROKHUMA on Wed, 16/07/2008 - 17:29
Dearest Sunita. I am proud you. You are my Great Indian Musician idol. I also remember Film Festival in Mumbai in 2007, you are the guest there. I hope one day your show will be in Mizoram. Bye, Mr.Rokhuma, Artist Aizawl, Mizoram

Permalink Submitted by diana mavroleon on Thu, 17/07/2008 - 01:45
Hello Sunita, Yes, this definitely conjures up the enthralled audience of the Nehru Centre that night of your concert; great that the pieces are listed also. The centre has become my 'University of lndia' and l am spreading the word amongst artists here in London, none of whom seem to know anything about it! l feel so lucky to have found it. Best wishes to your Mother and to yourself and good luck with all the projects, Diana x ******

Permalink Submitted by Aradhana Kataki on Sat, 19/07/2008 - 20:53
Dear Rumki (Sunita), The world has discovered the treasure we have. We feel so proud. Thank you and Minti baideu. Bonumahi

Permalink Submitted by Gaurav Kataki on Mon, 21/07/2008 - 18:33
Dear Rumkiba(Sunita, We all are extremely proud of you and Minti jethai. Love and regards Gaurav(maina),Dibrugarh

Permalink Submitted by jul on Wed, 24/06/2009 - 08:16
hi ba, how ru? i know, you stay here in powai, mumbai. longing to see you. wonder, if you would recognize me. m, pankaja (jul), sister of konkana(konki). we studied in LFS, dibrugarh. know you since than. i met your mom in my weddding last year (nov 23rd 2008, guwahati). infact, my husband abhineet(sanju) know your family very well. we both received the blessings from your grand mom, too. we stay in poonam nagar, mumbai. really look forward to meet you. lots of love. jul 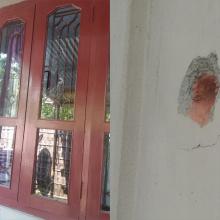 Miscreant fires round of shots at lawyer's residence

12 May 2016 - 8:51pm | Shajid Khan
Unidentified miscreants fired rounds of gun shots at the residence of lawyer Rajiv Khaglary at Maibanguri of Udalguri district. The incident occured on Thursday pre-dawn at about 2 am. Miscreants who...

Thanks a ton Angkushita

27 Nov 2017 - 8:02am | AT News
GUWAHATI: BTAD areas keep celebrating the victory of Angkushita Boro in the AIBA youth wold boxing championship in Guwahati on Sunday. Since the 17 year old pugilist from Dhekiajuli was put in the...