Come to Assam and get the pulse

12 Apr 2018 - 2:52pm | Akshaya Pranab Kalita
GUWAHATI: Prominent citizens and social activists in Guwahati staged a sit in on Thursday opposing the decision of the Joint Parliamentary Committee on Citizenship (Amendment) Bill, 2016 to institute... 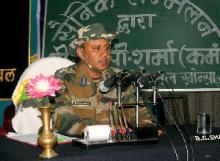