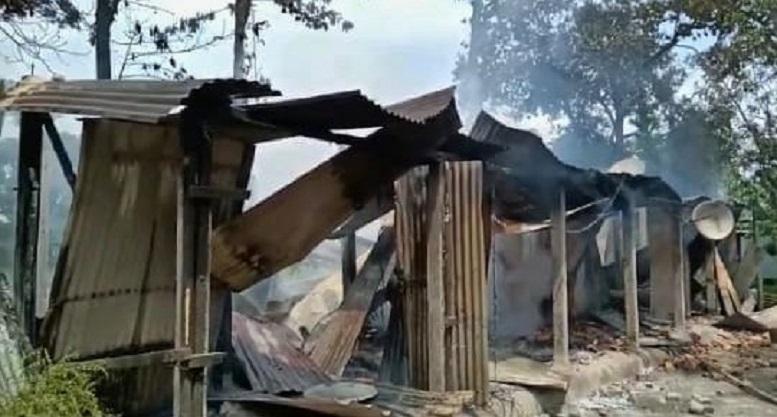 BAKSA: In a hair raising incident, two brothers were allegedly lynched by a mob of irate villagers in the victims residence in Athiabari village near Simaluguri in Lower Assam’s Baksa district 120 kms of Guwahati at about 8 am on Wednesday, April 22.

Police suspect that the vicious assault have occurred out of 'village enmity ' as the villagers were fed up of the notoriety of the victims who were history sheeter against whom there were registered cases of dacoity, extortion and were recently released from jail on bail couple of days back owing to the Supreme Court directive to decongest prisons in wake of the Corona virus pandemic.

The victims identified as Biswajit Das (24) and Haradhan Das aka Heba (35) were killed by the irate group who were later declared brought dead at a local medical facility. The mob also attacked their mother Subrata and Biswajit’s wife Priyanka, who are undergoing treatment in a hospital. Their condition is said to be stable. The mob also set their house ablaze.

“They were released on bail a few days back as per SC directive. There have been reports that a scuffle broke between the villagers and the duo who were known to each other and later a group of villagers attacked their house this morning and killed them. We are investigating the matter to find out the cause of the scuffle and the situation is normal in the area,” a senior cop told this correspondent requesting anonymity.

However the officer refuted it to be a case of mob lynching and said it is not a “ mob lynching in true sense of the term" as the perpetrators and victims were known to each other.

“The victims were natives of the village bordering Barpeta district and the only were known trouble makers who had unleashed a reign of terror and had invited the wrath of the villagers owing to which scores of villagers gheraoed their residence and lynched them.” said a village source.

“Mob lynching and mob violence arouses no astonishment as it has become norm in the country where police administration have failed to check law and order even amid lockdown ,” said a human right activist of Guwahati who strongly condemned the killing.

Police sources divulged that investigating have proceeded and police have also zeroed down on the suspect and arrested two persons of the village Bhola Sahani and Kanchan Debnath in this connection. Baksa Police also confirmed the arrest. Kanchan Debnath is reportedly the General Secretary of All Asom Hindu Suraksha Sena (AAHSS) Central Committee. However the senior cop privy to the investigation said that it is a matter of 'village enmity' and no organization is involved in the incident, the accused might have acted on his personal capacity. "A manhunt have also been launched to nab the other perpetrators of the crime." He added.

24 Apr 2016 - 12:33pm | Jayanta Kumar Das
A national level seminar on Human values and creative literature was held at Khoirabari College on Saturday with day long programme. The event was organized by Assamese department of Khoirabari...