Voters from irrespective of communities come out on a enthusiastic mood and turn in long queue to the voting centres to cast their votes o the second phase Assam asembly polls since early morning, the polls was started from 7 am all over the region, included Bodoland Territorial Council (BTC) area.

Sitting MLA and BPF candidate for Kokrajhar east Pramila Rani Brahma said, ‘We have been forming alliance government at Dispur on the blessing of citizens’ support.This time common voters are extending support us, besides voting in favour of alliance parties that is why the grand alliance is making their grand scoring of majority results. She also said that her winning is sure for six consecutive terms from Kokrajhar east seat this time too’.

UPP president Brahma expressed his hopeful that Congress-UPP alliance party is winning majority seats in both first and second phases polls, government would be formed by alliance party with no doubt.He has claimed that this time common voters are extending support to the Congress-UPP party to gain social integration and uplift among society.

Binay Kumar Brahma, a professor by profession said, ‘We are feeling very excited to be involved to cast our votes on the polls in a peaceful manner.We have cast our votes to elect our peoples representative.Voters come out to be participating in the polls since early morning’.

Sumi Das,a college going student, after participating voting exercise at Vidyapith High School polling station said that it was a happy moment for voters that this time polls was held in a peaceful manner without any incidents in the region.

Pradip Dey,a voter in Uttamachen ME School polling centre said that this is a very peaceful and happy moment to participate in the assembly polls, that was passed off  in enthusiatic situation.

‘We have never seen such a healthy and pleasant situation during polls in the region.It was a laudable arrangement on the day by concern commission’,he said. 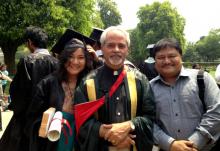 13 May 2013 - 8:02pm | Raktim Baruah
Priyanka Das has secured admission in the Master's program in Ecole Polytechnique, Paris with two scholarships covering tuition and living expenses. An outstanding student all throughout, currently...

1 Aug 2009 - 11:26am | bishwajeetsinha
One side Railway Minister Ms Mamata Banerjee is insisting on increasing facilities to passenger, specially targetting railway station in West Bengal as more and more station is under upgradation list...