Sibasagar: There was a false alarm at Sibasagar when police received a call informing them that one Mr Dilip Chetri a ULFA member was on his way to the Indian Bank to deposit a large sum of money there. Police and Army personnel descended on the Bank and waited for almost three hours but no one turned up. Investigations are on. 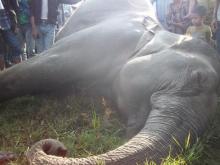 24 Dec 2017 - 5:06pm | AT News
GUWAHATI: Former chief minister Prafulla Kumar Mahanta dropped a bombshell on Sunday revealing that the Centre is prepared to grant citizenship to the Hindu refugees who came to the country six years...

5 Jun 2008 - 3:00pm | editor
The All Adivasi Students’ Association of Assam has called for a 12 hour statewide Assam bandh on Friday demanding capital punishment for the sacked education minister Ripun Bora for his alleged...