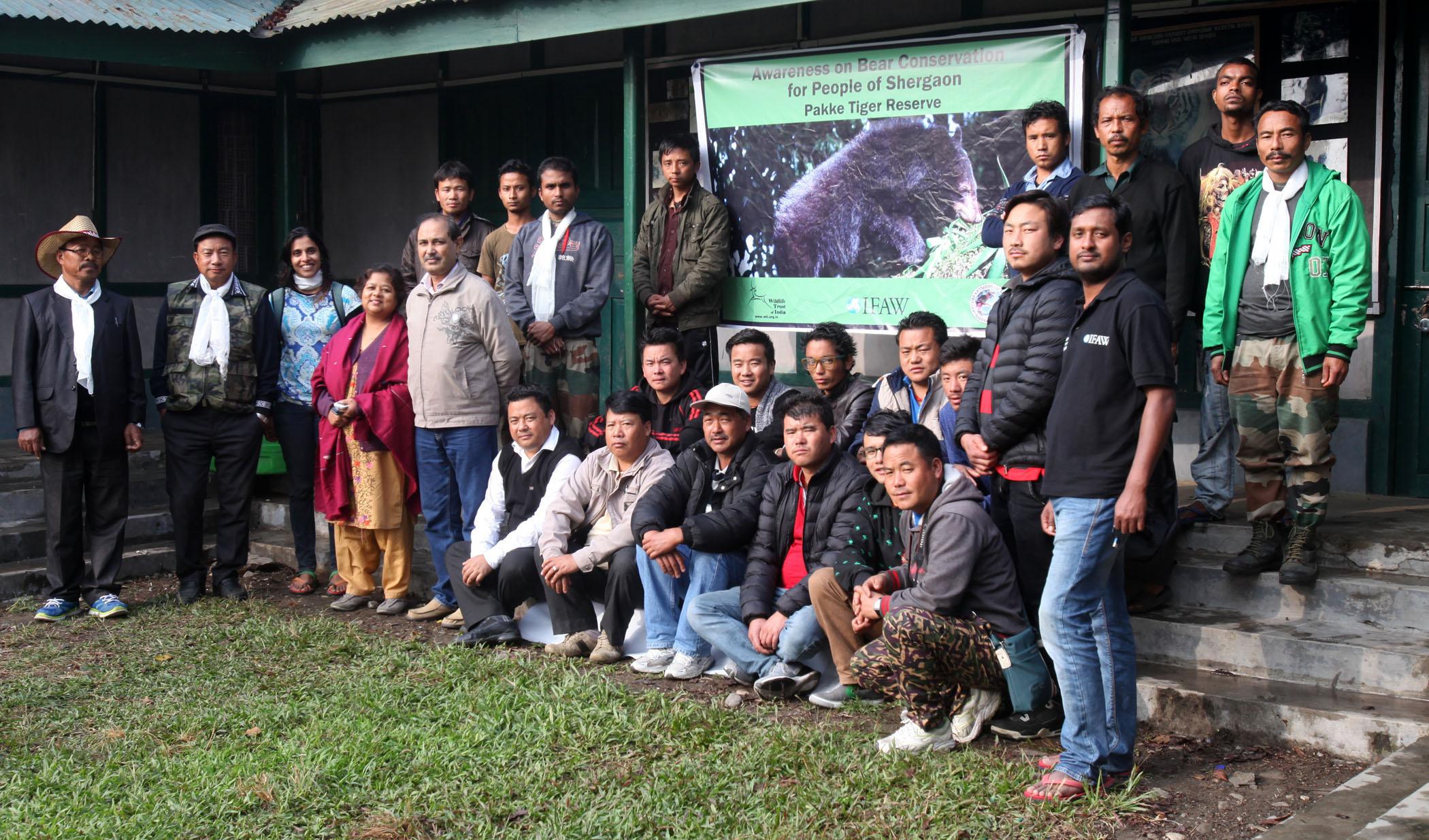 In a first of its kind sensitization programme on Asiatic black bears, 14 youth from Shergaon - a small but important area in Arunachal Pradesh – were taken on an exposure visit to IFAW-WTI run Centre for Bear Rehabilitation and Conservation (CBRC) in Pakke Tiger Reserve. At CBRC, the visitors were briefed about the importance and need for conservation of wildlife and bio-diversity in Arunachal Pradesh.

Shergaon falls in the West Kameng district of Arunachal Pradesh and the residents are predominantly Sherdukpten, a tribe Buddhist by religion.

To effectively spread the message of wildlife conservation among the villagers of Shergaon, IFAW-WTI partnered with a local NGO named Garung Thuk. It was decided that a 14-member group consisting of youth from Shergaon will be named as conservation ambassadors who will motivate locals to give up the traditional practice of hunting Asiatic black bears.

Explaining the need for this awareness programme, Sunil Kyarong, Regional Head, IFAW-WTI, said, “These animals are highly valued in Arunachal for their body parts. Hunting still remains the biggest threat, but human-bear conflict has also increased multi-fold in the last few years. Therefore, sensitising the locals on the conservation of Asiatic black bears is of utmost importance for the well-being of this specie.”

During the course of the visit, the Divisional Forest Officer of Pakke informed the youth about the wildlife conservation activities being undertaken by the Forest Department in Pakke and Arunachal Pradesh. Meanwhile, Dr Jahan Ahmed, Project Lead, CBRC, shared his insights on the conservation efforts of IFAW-WTI in the landscape. Takam Nabam, Chairman, Ghora Aabhe Society, shared his experiences on the efforts of the community in conservation of wildlife in Pakke. The day long program was organised in Pakke Tiger Reserve on Tuesday (15th December 2015) with field trips.

Praising the efforts of IFAW-WTI, Tana Tapi, Divisional Forest Officer, Pakke Tiger Reserve, said, “This exposure trip and conservation training will bear fruits. I am hopeful that after witnessing the conservation activities of Arunachal Forest Department and IFAW-WTI in Pakke Tiger Reserve, the youth of Shergaon will be moved to get involved in conservation activities. This visit will also inspire them to spread the message of saving wildlife amongst locals.”

Dorjee K Thungon, Deputy-Chairman of Garung Thuk, expressed his willingness to strengthen the bond with IFAW-WTI. He said, “This exposure visit organised for Shergaon’s youth should bring about a change in the attitude and perception of the villagers towards conservation with a special emphasis on bear conservation.”

With the intent of developing a strong bond between conservation organisations and other stakeholders, the aim of such exercises is to discourage traditional hunting practices. This first of its kind initiative from IFAW-WTI will hopefully pave a new roadmap for protecting Asiatic black bears in this landscape.

13 Jan 2012 - 8:57pm | Anup Arandhara
This is a good news for our state. The gas based Lakwa thermal power station under Assam power generation corporation Ltd, located at Maibella of Sivasagar district has now improved its generation...