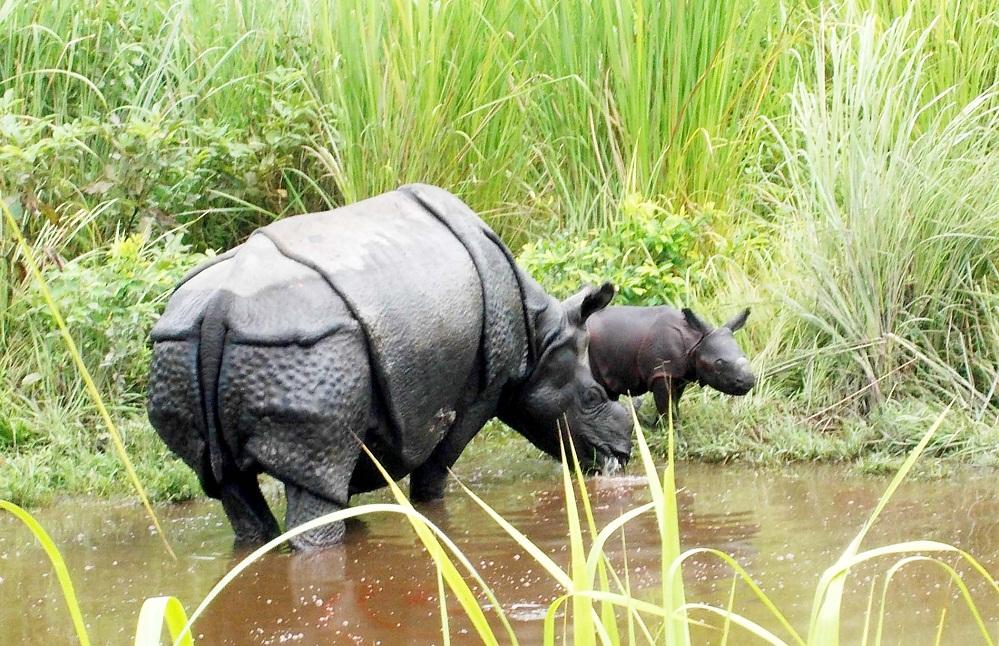 ‘Jamuna’, a female rhino that had been rehabilitated into the wild by Wildlife Trust of India (WTI), the International Fund for Animal Welfare (IFAW) and the Assam Forest Department in 2010, has given birth to her second calf in Manas National Park, the UNESCO World Heritage Site, on Sunday morning.

The calf was first seen by frontline forest staff of the Bansbari Range during their early morning patrol. Its presence was later confirmed by a field team of IFAW-WTI’s Greater Manas Conservation Project, comprising Dr Bhaskar Choudhury, WTI's Head Veterinarian (North East) and the project-in-charge, and animal keeper Debajit Saikia.

“This is the sixth calf born to the rhinos rehabilitated under our project and marks another significant milestone in our collective efforts to restore Manas to its former glory”, said Dr Choudhury. “It is a matter of great pride for IFAW-WTI, the Assam Forest Department and the Bodoland Territorial Council (BTC). Our thanks also to the local community for their continuing tolerance towards rhinos despite instances of crop raiding.”

Jamuna was the third rhino rehabilitated under the Greater Manas Conservation Project. She had been rescued by the Assam Forest Department during the 2004 monsoon floods in Kaziranga National Park and brought to the Centre for Wildlife Rehabilitation and Conservation (CWRC) -- IFAW-WTI and the Assam Forest Department’s wildlife rescue, treatment and rehabilitation facility near Kaziranga -- where she was hand-raised. She was transported to Manas and released into the wild in November 2010. She birthed her first calf, a female, in 2014.

“I’m extremely pleased to receive this news”, said HK Sarma, IFS, Field Director, Manas National Park. “This is the first rhino calf born in Manas in nearly 20 months. My congratulations to IFAW-WTI, BTC and other stakeholders on this happy occasion.”

All for justice to Renuka

11 Oct 2014 - 6:17am | AT News
HANTIGIRI NARZARY, KOKRAJHAR: Hundreds of women activists under the banner of the All Bodo Women’s Welfare Federation staged protest in Kokrajhar on Friday demanding high level inquiry into...

4 Apr 2013 - 5:40pm | AT News
Stung by incessant criticism Guwahati police on Thursday arrested a businessman charging him with holding syndicate.Popularly known as Naanka, the businessman was nabbed by police at 2-30 in the...