A vital proof suggesting a dangerous link of Pakistani terrorists with north eastern militant outfits to strike in various parts of the country.

According to a media report, a telephonic conversation has been intercepted where an alleged Jihadi has firmly revealed the presence of at least 100 terrorists to strike in Assam along with some other parts of the country with active support from ULFA.

During the conversation, the caller claimed to have underwent training in Bhutan along with ULFA much to a major concern for the security forces deployed in the north eastern counter insurgency operation. 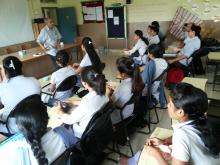 6 Oct 2014 - 10:56pm | AT News
SK HASSAN, Nazira: Muslims in Nazira celebrated Idd Uj Juha with traditional fervor along with other parts of the world on Monday.Dressed with traditional attire, the Muslims organized community...

13 Feb 2021 - 6:58pm | AT News
Probably, for the first time in recent history, a mandarin duck has been spoted near the Dibru-Saikhowa National Park in Assam. Eminent poet and novelist Dr. Neelakshi Chaliha Gogoi informed that the...