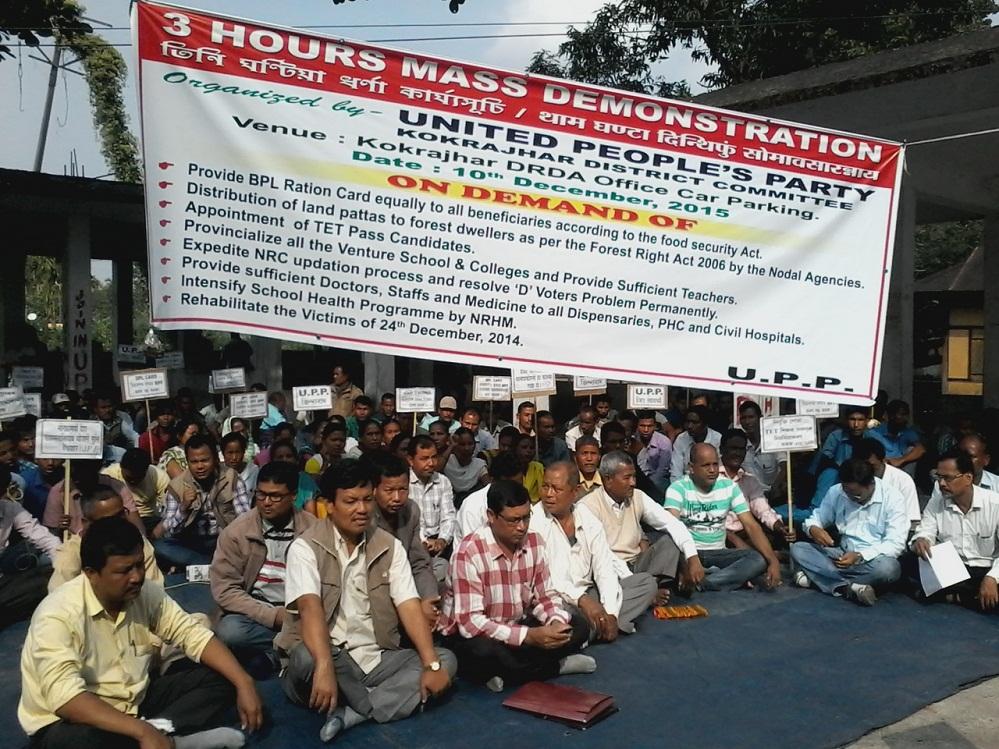 The United Peoples Party(UPP),a regional party in BTAD strongly voice for the peoles’ rights and justice that are deprived due to autocratic functioning of BPF ruled in the region.

Hundreds of UPP activists and common publics thronged the three-hours mass demonstration with banner,festoone and placards shouting slogans demanded various issues and grievances of the common publics which included stopping of distribution of Ration Card by BPF activists,equally distribution of BPL Ration card to all beneficiaries according to the Food Security Act,appointment of TET pass candidates and regularized the services,expedite the process of NRC updation and resolve the issues of ‘D’ voters.

The demonstration was organised by Kokrajhar district committee of UPP in association with central committee of the party in-front of the DC office on Thursday in Kokrajhar.

The party charged that ruling BPF party has been corrupted of the development funds that are reached to the region for common publics from centre and state,of which why general citizens are deprived from rights and justice in the region.

Later,a memorandum was submitted to PB Acharya,Governor of Assam through Deputy Commissioner,Kokrajhar and demanded strong steps to the issues that raised into citated memorandum.

UPP president and ex-Rajya Sabha MP Urkhao Gwra Brahma while participating the demonstration strongly slammed the BPF ruled BTAD administration said that peoples are remaining far from development and their rights as ruling party has been maintaining autocratic style since last decade in the name of ruled.He has alleged that common citizens are living under deprived in all fronts like equal distribution of BPL Ration card,land pattas;besides facing hardships of sufficient teachers in schools,doctor and staffs and crisis of medicines in the region.He has demanded development scheme and social rights be distributed equally among all sections of citizens and held a healthy integration which will carry peace and unity.

20 May 2008 - 4:13pm | editor
At last forest department has managed to arrest poacher Manu Bazbaruah from the city on Monday. According to information, Manu was arrested on his way to the Santipur based forest office. Later he...

28 Mar 2009 - 2:53am | editor
An uneasy pre poll situation is prevailing in Kokrajhar when unidentified blank fired in front of a BPF election office on Friday morning forcing the authorities to beef up security arrangement in...