Amid an escalating crisis within the Arunachal Pradesh Congress legislative body, chief minister Nabam Tuki inducted 3 cabinet ministers a day after Governor JP Rajkhowa accepted Tuki's suggestion for removal of four cabinet ministers. Rajkhowa administered oath of office and secrecy to the newly inducted cabinet ministers at a brief function at the Raj Bhawan in the afteroon.

Osho- The Master of Meditation and Silence 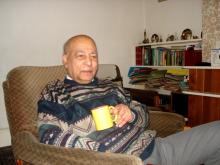 A Tribute to Jitendra Nath Barooah

3 Nov 2011 - 1:53pm | Rini Kakati
Last Tuesday evening I had a shocking phone call from a friend telling me Jitendra Nath Barooah passed away in his sleep at his Southfield residence. He had a heart attack, lying fully clothed in...