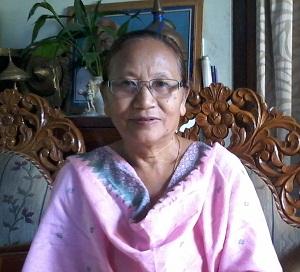 Former minister Pramila Rani Brahma has demanded strong security cover up along with suited arms like AK 47 with PSO attached to her in her position, otherwise she would withdraw her securities by tomorrow.

Brahma while talking exclusively today in Kokrajhar slammed the state govt for reducing of securities attached to BTC chief Hagrama Mohilary since few days ago said that it was condemned act from govt in today's life as securities were reduced from its strength.

She has demanded early providing of large number security arrangements along with suitable arms like AK 47 with PSO as  well expansion of house guards to meet protocol status.

5 May 2017 - 9:54am | AT News
As many as five UDLF rebels are believed to have sustained injury when they were caught in a gun battle with security forces along Assam-Meghalaya border on Friday. The encounter took place at...

13 Dec 2016 - 6:08pm | AT Kokrajhar Bureau
Additional Director General of Police for BTAD Dr LR Bishnoi has offered surrender opportunity to the NDFB-S leaders, including G Bidai saying that they would be treated as well being as per...