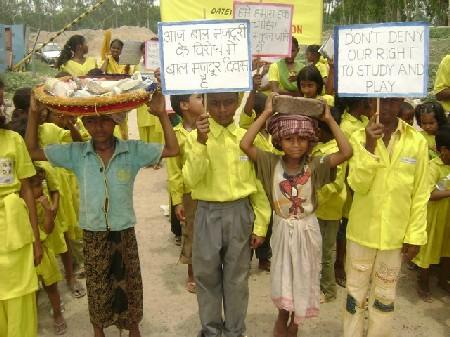 JBF Welfare Organization observed World Day against Child Labour by generating awareness among the general public with symbolic activities. The activities started from the JBF Informal School, Viklang Basti unit in South Delhi. First, the children of the school that are from the slum areas were told about the importance of the day. Then around 50chilldren started a procession from the school premise to the nearby places and finally to the CGO complex, the prime area where major government offices are located. The procession was with banners & placards besides few children demonstrating the child labour. The children were shouting the slogans against child labour while marching. Whenever enthusiastic passerby asked about the procession, the JBF team members made them understood about the significance of the Day. Finally the children shouted slogans in front of the small eateries located in front of the CGO complex where many children works.

The procession was a great success in motivating & providing information against the Child labour.

24 Feb 2013 - 7:17pm | AT News
Over 70 per cent voters cast their votes in the Algapur Assembly by-election on Sunday. The polling was peaceful.The voting which began at 8 in the morning ended at 4 in the afternoon. Polling in the...

13 Nov 2016 - 11:20am | AT Kokrajhar Bureau
The Ramfalbil Anchalik committee, All Bodo students Union (ABSU) organized career counselling and motivational programme in the name and style of my education my future at Janata College, Serfanguri...