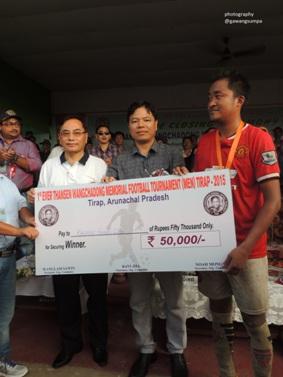 In his speech Nampong MLA Laisam Simai appreciated the organizers and the sponsors for conducting the tournament smoothly and efficiently. He said that football was the most popular game in the world and asked the youths of Tirap to take keen interest in games and sports adding that they could make a career out of sports in all categories of jobs. He urged the youths to have their inherent skills through constant practice.

14 Oct 2015 - 8:52pm | AT News Itanagar
In all 51 youths from the State are selected to undergo a 6 month long skill development training at Orion Edutech, Kolkotta. Twenty six youths will undergo training in Beauty Sector and 25 will...

17 Sep 2015 - 10:32pm | Hantigiri Narzary
Police on Thursday got remand of Amitabh Sarma for three days after the PWD engineer in Chirang district was arrested in connection with a Rs 1.5 crore scam in the department. Before that he was...

12 May 2011 - 3:34am | editor
Five members of All Assam Shramik Krishak Parishad were prevented from meeting Irom Chanu Sharmila on Wednesday as they were not given official permission. The five-member-team of the organisation...