Thirty- seven school teachers from the fringe villages of Greater Manas attended the Animal Action Education (AAE) workshop conducted by the International Fund for Animal Welfare (IFAW) and Wildlife Trust of India (WTI)  at Central Institute of Technology (CIT) in Kokrajhar, the capital city of Bodoland in Assam. The one day workshop conducted on 23rd September 2015 was supported by Elementary Education Department and was organised in association with Assam Forest Department and Bodoland Territorial Council.

The main objective of the workshop was to spread awareness about keynote species existing in the forest habitat of Greater Manas landscape in Bodoland Territorial Council (BTC) amongst school children. Children from Class I to IX were targeted through the teachers, who play a crucial role in spreading the message of wildlife conservation among school children.

School children are the future of a nation and if love for wildlife can be inculcated in them at an early stage, then they grow up to be responsible citizens who will in the future protect the natural heritage of India.

People living around Manas National Park have historically had a close association with Asian Elephants and this year’ workshop theme on elephant conservation was greatly appreciated by the teachers.

In the technical session of the workshop, Subhamoy Bhattacharjee, Assistant Manager, Awareness for Conservation department of IFAW-WTI discussed the need for such a workshop with teachers. The film “Elephants Never Forget” was shown to the school teachers for their better understanding of this species. The film show was followed by an interactive session  on  “Teacher’s Role in Wildlife Conservation.” Many issues related to conservation from planting a sapling to ivory smuggling were discussed.

In her keynote address she said, “Wildlife and bio-diversity needs utmost care and attention in this fast growing world. If we do not understand the need of a tree or forest we will be at loss in the future and our own wildlife will be in crisis. So, to keep a balance among the wildlife and human habitat there is need for awareness and this is possible through the teachers who are actually the torch bearers of society,. I wish that with this workshop, the honourable teachers who are my colleagues too, can play a significant role for increasing children’s awareness on wildlife conservation.”

Sanatan Deka, Field Officer and Project Lead of IFAW-WTI, a sociologist who has been working with the communities in Greater Manas Conservation Project (GMCP)  gave an overview of IFAW-WTI ‘s work in Manas for the conservation of wildlife and bio-diversity in the Himalayan foothills connecting neighbouring Bhutan.  IFAW-WTI has been working hard to bring back and secure the natural heritage of Manas.

Dr. Manasi Buzarbaruah, Assistant Professor of Central Institute of Technology (CIT), who attended the workshop as Guest of Honour appreciated the effort of IFAW-WTI and its contribution to wildlife conservation in northeast India. She also mentioned her voluntary involvement during first rhino translocation to Manas National Park by IFAW-WTI. “I hope IFAW-WTI will come out with some new innovative activity packs like this Animal Action Education pack suiting the requirements of the people of Manas especially  children ,” she said.

Kamalakanta Basumatary, a senior teacher of Panbari High School stressing  the need of wildlife conservation said, “Sometimes we face real difficulties in making people and children understand why we need the elephants, rhinos, tigers and such other animals, so it’s important to make the children understand that these are the keystone species and the indicators of well balanced biodiversity”.

Rongjuli Musahary, Head mistress of Ballamguri M. E. School thanked IFAW-WTI for organising such informative workshop on wildlife conservation in BTC. “After attending the AAE sessions, I discussed with my fellow teachers to organise a wildlife painting event in our school very soon. This type of training will help not only the teachers and but also attract the school children towards wildlife. Their love for nature can be nurtured through this programme,”  said Ms. Mosahary.

The task of conducting AAE workshop covering the fringe schools of Manas landscape in BTC is not an easy one. Most of the schools are so remote that it takes almost a day for a teacher to attend any event in the capital city. Many of the areas have no roads and the recent flood wave has washed away the connecting bridges and roads.

“Thanks to the co-ordination, hard work and persistence of IFAW-WTI team of Sanatan Deka, Field Officer and Project Lead, Amitabha Choudhury Assistant Project Officer, Subhamoy Bhattacharjee, Assistant Manager and Subiram Basumatary along with Mukul Kalita of Assam Forest Department that organised the AAE event that these remote schools around Manas will have access to an internationally developed learning programme that is so much tuned to their daily life with elephants in the wild,” concluded Rupa Gandhi, the country lead of IFAW- WTI Animal Action Education.

Animal Action Education (AAE) project run by International Fund for Animal Welfare (IFAW) – Wildlife Trust of India (WTI) aims to educate and raise awareness about animal welfare issues among our youngsters and reach out indirectly to their parents, educators and everyone in the society. The project has its presence in 18 countries worldwide and reaches out five million young people.

Talks over Assam Accord will clear citizenship jinx

5 Jan 2018 - 5:01am | AT News
NEW DELHI: A soon to be convened tripartite talks over the Assam Accord is expected to clear the citizenship controversy. This was what the impression of Dr Samujjal Bhattacharya after the AASU...

10 Dec 2012 - 4:44am | editor
Chief Minister Tarun Gogoi on Sunday said that proper education should be implemented from the grassroot level.In his keynote address at the Pan IIT Global Conference 2012 Science City Auditorium in... 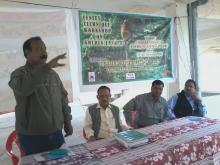