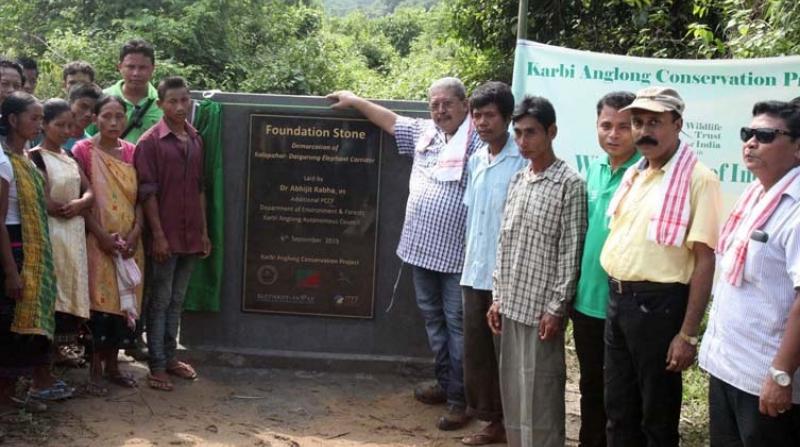 Physical demarcation of the Kalapahar-Daigurung elephant corridor in Karbi Anglong district got a formal boost after a foundation stone was erected at a ceremony organised by Wildlife Trust of India (WTI), under the guidance of Dr Abhijit Rabha, IFS, Additional PCCF, Karbi Anglong Forest Department. The foundation laying ceremony was attended by senior officials of Wildlife Trust of India, Assam Forest Department and heads of villages that fall within the corridor on Sunday,6th September 2015.

Unveiling the foundation stone, Dr Rabha, said, “This is the first of its kind corridor securement project in the northeast India. I hope with the joint effort of Wildlife Trust of India-Elephant Family and Karbi Anglong Forest Department, the Kalapahar-Daigurung elephant corridor will be secured and the human-elephant conflict can be brought down.” WTI with support of Elephant Family (EF) and Karbi Anglong Forest Department has joined hands to secure this corridor which is one of the most vulnerable elephant corridors of northeast India.

With this unique corridor securement project, WTI-EF and Karbi Anglong Autonomous Council will relocate 19 families from Ram Terang village, which falls within the corridor, to an alternate site that has very little human elephant interaction. Each family will be provided a house with basic amenities and a suitable amount of cultivable land.

During the Foundation Stone laying ceremony, Mondor Terang, a beneficiary from Ram Terang village, said, “We are thankful to WTI for their support to secure our living. They have already provided us a power tiller, three manual carts and two community fisheries to support the 19 families that have voluntarily decided to relocate to the alternate site.”

Speaking on the occasion, Dr Bhaskar Choudhury, Regional Head, WTI, said, “To mitigate human–elephant conflict, securing corridors is one of the best ways propagated by experts. By securing this corridor, WTI would set an example before the government agencies and other stakeholders on how to address the rising conflict cases. Kalapahar–Daigurung elephant corridor in Karbi Anglong is one of the corridors recognised by the government of India.”

Dr. Choudhury also stressed that in near future other government agencies and organisations will come forward to secure rest of the elephant corridors for wildlife conservation in northeast India. Dilip Deori, Manager and Project Lead, WTI, thanked Elephant Family for their support to this unique project in Assam.

WTI has been working across the country on securing corridors and has successfully secured three corridors in Karnataka, Meghalaya and Kerala.

7 Oct 2014 - 6:44am | AT News
More people are believed to have fallen ill in Jagiroad after chlorine gas leaked from Hindustan Paper Corporation paper mill in Morigaon district.Ten more people have taken ill with complaint of...

15 Jan 2016 - 11:37am | AT News
In an effort by the District Police to curb cattle smuggling through this district to Bangladesh yesterday late night the 13th January 2016, a team of SOT personnel acting on a tip off seized  ...