In the grip of X-Mas evening

24 Dec 2014 - 7:18pm | AT News
Despite the shocking serial attack on innocent people in Kokrajhar and Sonitpur districts, Assam is gearing up for Christmas celebration to mark the birth of Jesus Christ.Churches, shops and markets... 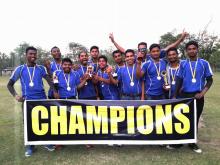