2 May 2014 - 8:43pm | Hantigiri Narzary
Assam additional director general of police AP Rout said that there are 10 additional paramilitary companies arrived in BTAD to take security measures, of which three for Kokrajhar district. ... 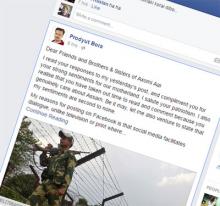 3 Dec 2014 - 4:49pm | Lakhinandan Gogoi
Caught in a barrage of criticism over Modi’s open support to the Indo-Bangla land deal, Assam BJP leaders trying to maintain distance from the party activists.The party heavyweight, mostly, are not...