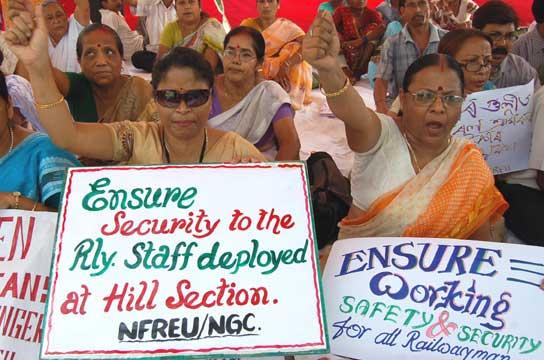 Members of NF Railway Employees’ Union staging dharna demanding to ensure the safety ands security of the Railway Staff that are deployed at the NC Hill Station after the serial brutal attacks by the militant groups on the railway employees as well as the local people at the Lakhidhar Bora Khetra in Guwahati on 16-05-08. Remarkably, on 15th March ’08 morning, ten workers working for a cement company brutally gunned down by the suspected DHD (J) group in the morning creating havoc among the people reside in that area.

11 Apr 2015 - 7:45pm | Nava Thakuria
An Assam based painter invites brickbats from various organizations for his artworks where he has painted the Indian national flag in poor light. Moreover the same artist Akram Hussain faces...

19 Jan 2016 - 6:57pm | AT News
The historic Digholipukhuri, located in central Guwahati, has been facing perils of different nature since many years, rubbish dumping, water pollution  as well as lack of maintenance. The...