The 3rd annual session of Assam union of working Journalists Udalguri district committee concluded recently at Kalaigaon on May 24.The two days session was inaugurated on May 23 by Haren Kalita of UNI.Mukut Raj Sarma Advisor of the district committee and senior journalist Gautam Jyoti Talukdar attended as the observers. On the concluding day on May 24 unions flag was hoisted by Rabindra Rabha,president of the district commitee. The discussion session on “Role of journalists in rural agriculture” was held at 11 am on May 24.Keshab Kalita,president of the state committee conducted the session.Pulin Kalita president and Bhaskar Sarma secretary of the state committee also spoke on the occassion.A souvenir was also released on the occassion by Tridip Daimari,Speaker of BTC assembly which was edited by Rama Kanta Nath and Dibakor Baishya. 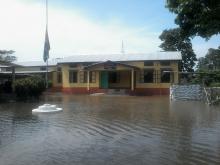 16 Aug 2015 - 4:58pm | Hantigiri Narzary
Flood waters in Kokrajhar wreaked no less havoc submerging a huge area in the district on Sunday. Much to the panic of the hundreds of local residents, the surging waters of the river Champamoti have...