Yet another bridge over the river Brahmaputra will give the state a fresh lease of life on the infrascture front. This was what Tarun Gogoi said when the chief minister was addressing a huge rally in Guwahati on Sunday organized to celebrate the fourth anniversary of the Gogoi government.
Gogoi said the state government itself would take the initiative to build the bridge over the mighty river.
According to Gogoi, during his tenure the state's roads and bridges get a new. He said his government would not halt the concentration. 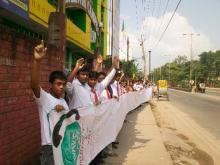