The 16th Border Security Force (BSF) deployed in Golaghat busted a racket making fake Indian currency notes which are circulating in Golaghat town and its suburb area and some parts of Karbi Anglong with its main unit in Bokajan of Karbi Anglong district. At an anonymous tip-off the BSF personals arrested three persons from different places involved in the crime and recovered a huge amount of fake notes and equipments.One Nilotpal Sarma (22), the gang leader was cought red handed from the busiest market place at Golaghat town while trying to circulate the notes. The security personals recovered ninty one paper notes depicting a value of Rs.500 denomination each. The total value in origional Indian currency remains at Rs.41.500. Resuls after interrogation of Nilotpal leaded the BSF personals to arrested one Jitu Hajorika of Barpathar and Khikeho Sema of Nagaland. The deputy commandant of BSF Mr. S. S.Thakur and Mr. Amit Jaiswal have informed the media that at Golaghat they have recovered a high quality of papers in huge quantity from which fake note of Rs.500 denomination could have been printed worth Rs.58,06,500.

A press note issued by the BSF unit at Golaghat while detailing the whole operation said that they received some information regarding the fake currency dealer in and around the district. Since the matter was considered to be very serious, they have constituted a special team led by Mr. S. S.Thakur and Mr. Ameet Jayswal, Deputy commandants respectively and by unearthing the great conspiracy, and did a commendable job by nabbing the culprits with the materials and equipments ahead of much damage could be done. The BSF at Golaghat in its press note claimed that the Seizure and recovery has made a big dent in the Fake Currency racket in North east India which is running with the support of the Hostile neighbouring states and insurgent organisation like NSCN(IM). This commendable job of BSF at Golaghat proves that it (BSF) is not only for protecting the nation as its sentinels but equally active and capable of dealing with the economic offenses which being done with a purpose to destablise the country.

12 Aug 2015 - 6:36pm | AT News
ULFA C-in-C Paresh Baruah’s mother Miliki Baruah is undergoing treatment at the Sanjeevani Hospital in Dibrugarh where she was admitted on Tuesday. Doctors attending on her said that her... 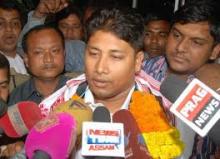