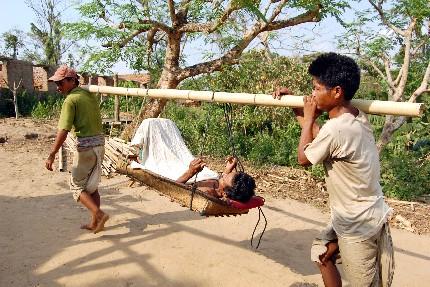 Tribal villagers carry a malaria patient to the hospital in a remote village of Bilaihum, about 75 kms west of Agartala, Tripura on 03-05-08. Official said that at least 18 personnel died due to malaria throughout the state in last 15 days. Only last week the Italian ambassador to India has visited the state and declared to fund projects of International Federation of Red Cross in Tripura to irradiate the dreadful malaria disease that claims hundred of lives every year in spite of several precautionary measures. Malaria remains a major threat for 3.2 billion people in more than 107 countries throughout the world.

15 Mar 2014 - 2:28pm | AT News
Tension is simmering near Diphu after a group of people clashed with police at Matipung forest on Saturday.The incident took place when over 100 landless people were trying to occupy a plot of land... 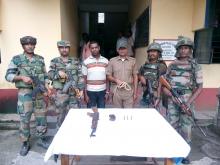 12 Feb 2013 - 4:45pm | AT News
The third and final phase of panchayat polls are over to be marred by a string of sporadic incidents of violence on Tuesday.Polling began at 7 in the morning to be closed in the afternoon where huge...