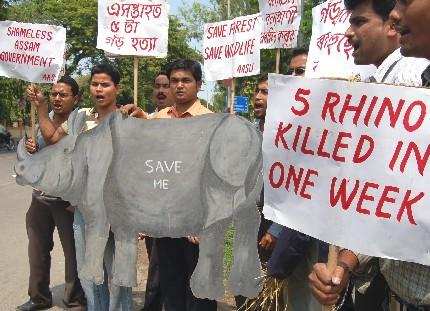 Mired in a controversy, the Assam govt has decided it will ask CBI to probe the rhino poachings in Assam. According to Chief Minister Tarun Gogoi, following an aroused demand, the government has decided to order a CBI probe into the killing of at least 27 rhinos in the Kaziranga National Park and the Rajiv Gandhi wildlife sanctuary in Orang since last December.

The government earlier ordered the transfer of Kaziranga Divisional Forest Officer Bankim Sharma and formed a nine-member committee to ascertain the reasons behind it.

Meanwhile, the panel has already started investigation and have visited the three rhino bearing areas of the state, Kaziranga, Orang and Pabitora game sanctuary.

It may be noted that at lease five rhinos in Kaziranga National Park and Rajiv Gandhi wildlife sanctuary in Orang have been targeted by the poachers while 22 others have been killed since December.

26 Apr 2012 - 7:34pm | editor
At least two people were killed and 25 others were injured in a road mishap in Barpeta district on Wednesday midnight. The incident took place at Garhchuk near Bajali when a wedding bus skidded...

6 Aug 2014 - 9:52pm | AT News
AGP MLA Phani Bhusan Choudhury called Wednesday’s noisy scene on the floor an unfortunate. In his reaction immediately after Anjan Datta staged walk out in the assembly in protest against the new...