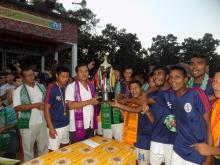 5 Jan 2018 - 10:15am | AT News
GUWAHATI: Traditional Assamese Bihuwan or drape along with lemon and smoked rice(kumol chaul) might get the GI tag. Courtesy Assam Agricultural University (AAU) which is working overnight to ensure...