In a major development after the 23 December 14 carnage in the BTAD areas of Assam,massive operations were launched by Army under Red Horns Division in the Udalguri District. The consistent and grueling operations carried out by the Army has finally produced result. Based on a specific intelligence, a joint operation was launched by Army Unit of Red Horns Division stationed at Udalguri, Police and NIA, along the forested area of Assam Arunachal border which resulted in the capture of dreaded terrorist, Bikunas Narzary alias Birlangbai with another four hardcore terrorists namely Bidai Singh Narzary alias Bugdaw , Lohit Basumatry alias B Ferkw, N Araibaw alias Aijak Narzary and Dura Singh Brahma alias B Khamshaw with recoveries of one AK 56 rifle with magazine, one 9mm pistol (foreign made) with holster, twenty five 7.62mm live rounds, fifty four 9mm live rounds and one hand grenade. The apprehension of Bikunas Narzary alias Birlangbai is a body blow to the NDFB (S), as he is the self styled commanding officer of thirteen battalion of NDFB (S). With his apprehension along with other accomplices, it can be said that the top leadership of thirteenth Battalion of NDFB (S) is wiped off. The capture of the terrorist has also created a sense of safety among the people who were threatened by these anti-national elements. 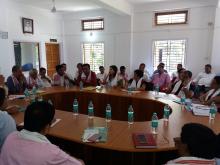 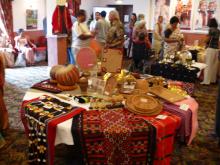 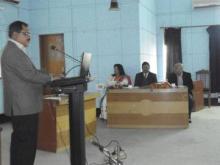